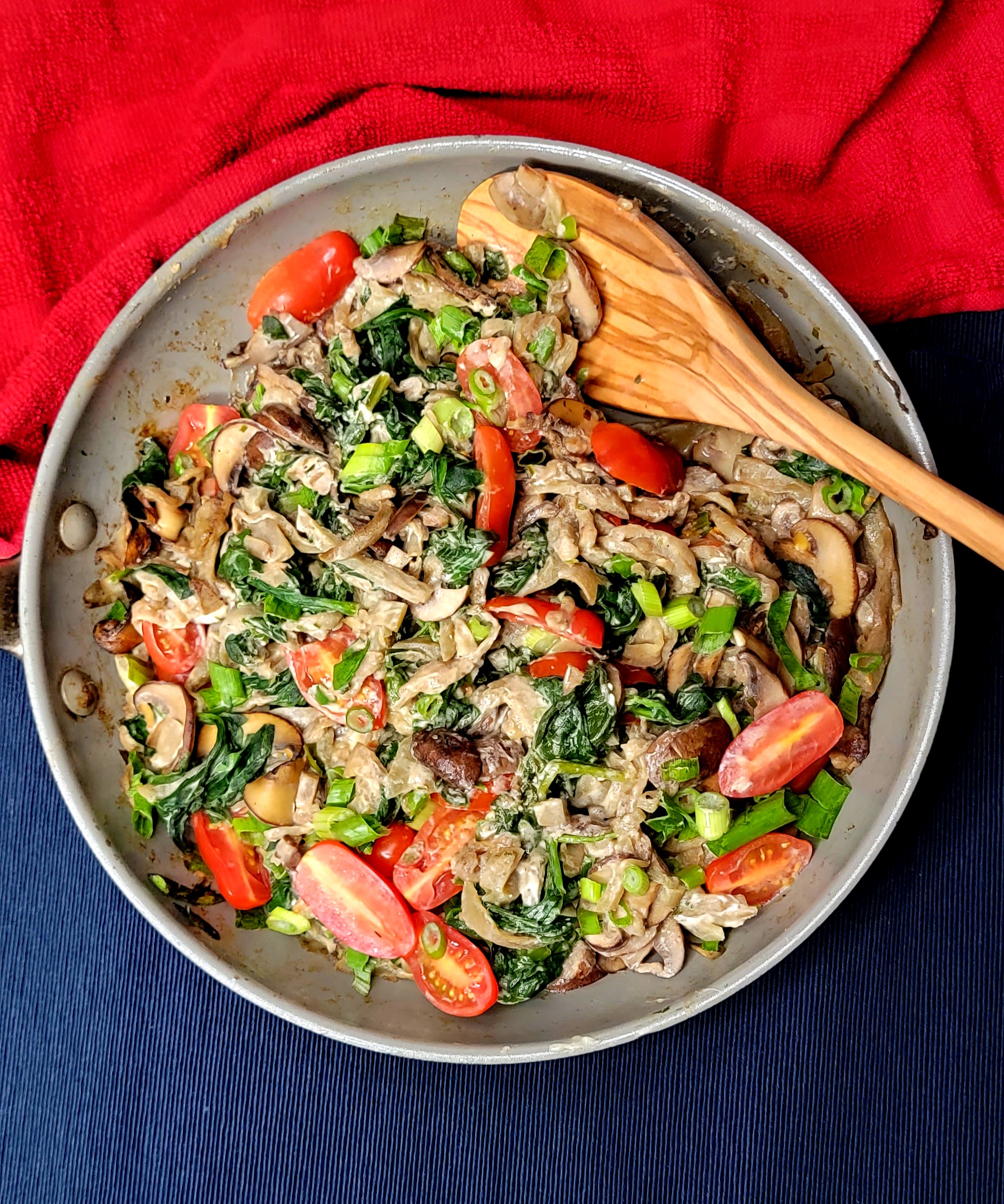 Eggplant Noodles with Spinach and Mushrooms 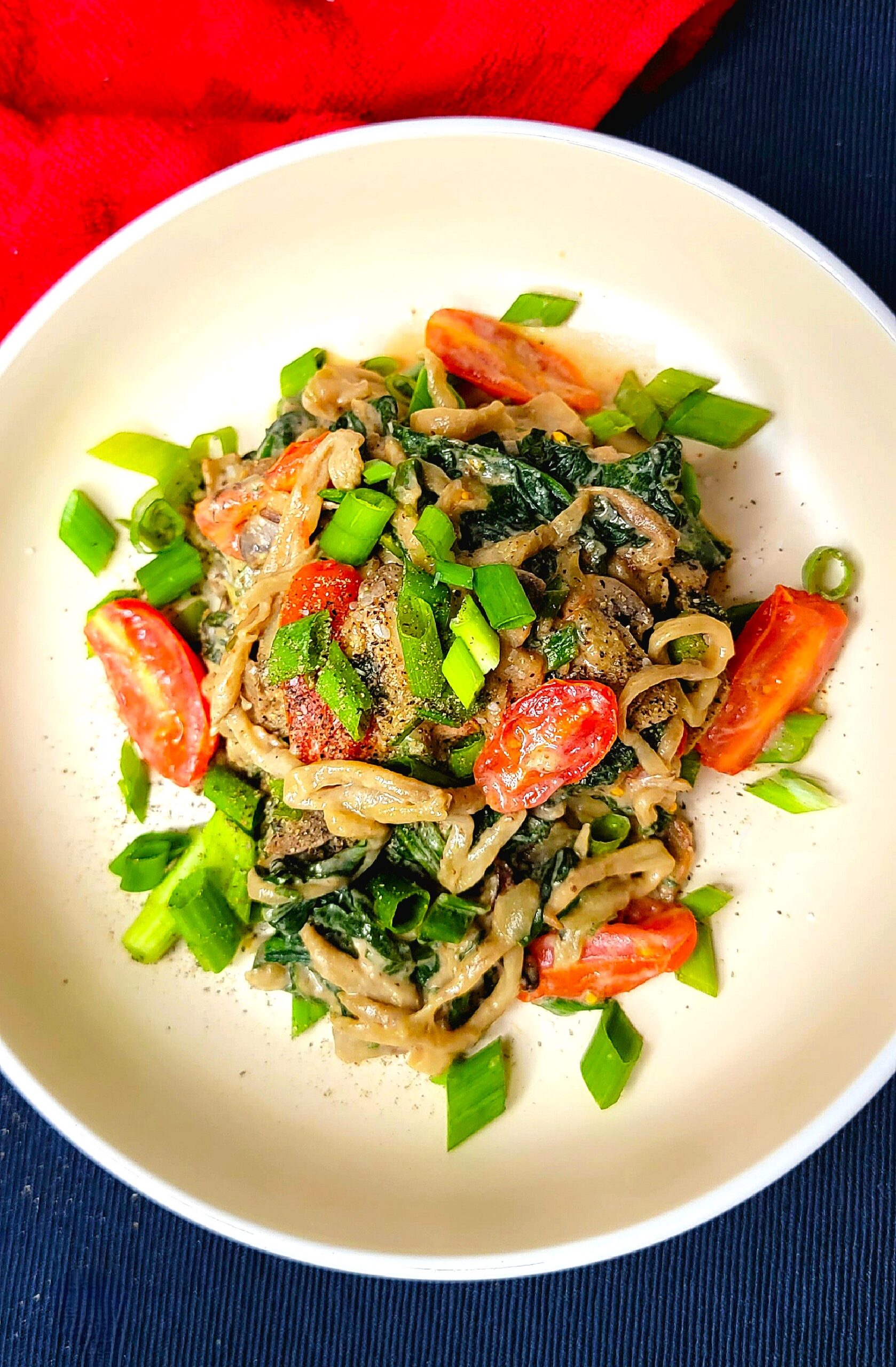 Eggplant Noodles with Spinach and Mushrooms. Gorgeous and packed with healthy ingredients!

How I came up with Eggplant Noodles with Spinach and Mushrooms

As everyone already knows, I came back from our winter trip sick with strep and who knows what else.  I was knocked out.

My Dear Social Media Guy (Adam) and all around media helper when needed, came up with a list of recipes and foods he found that he thought were super cool.

Thanks SO much Adam!

Anyway, he sent me a link to ballehurns  Tiktok page where she makes noodles out of eggplant.

Making Eggplant Noodles my Own

I loved the concept of taking an eggplant and making noodles out of them.  They’d be healthy and tasty.

I thought “What if I could use my cool spiralizer to make the noodles thinner and more even?”

So…I pulled out my awesome Gefu spiralizer and tried to spiralize the eggplant.

Wow.  What an epic fail.

The eggplant was just way too soft and wouldn’t spiralize.  It ended up a total mushy mess.

Using the Gefu Spiralizer for Eggplant was an epic fail.

Well, that didn’t work so I went back to using my amazing Hast knives (yes…this is a promotional plug 😀 – but only because I totally LOVE them) and sliced the eggplant into thin strips.  The strips were thinner than the ones that Ballehurns used and I thought they would be more “pastalike” for my dish. 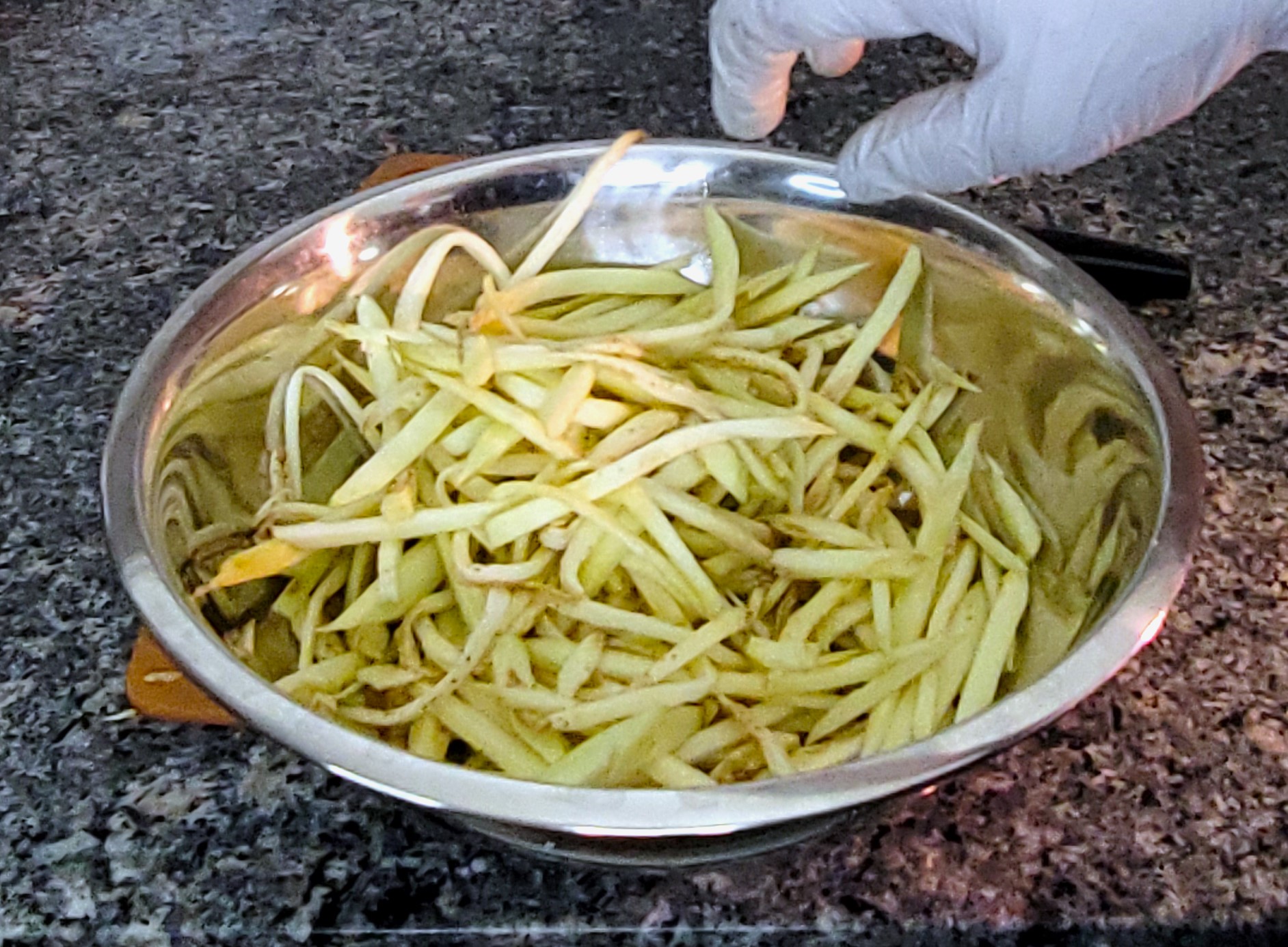 Eggplant Noodles cut very thinly. That is the amount of noodles I got from a single medium eggplant. This is pre-salting which will deflate the eggplant significantly.

l also sprinkled the cut eggplant with a little kosher salt and let it sit for around 15 minutes to remove all the excess liquid and bitterness that might be in the noodles.

There was a lot of liquid that came out.  I was a little surprised.

Draining the Eggplant Noodles Check out how much liquid comes out!

Making the sauce for the Eggplant Noodles

There’s a phrase that we use in the Engineering world:

I try to KISS every recipe I made unless it’s totally necessary.  Using the KISS methodology, making a super simple creamy sauce would only require one or two ingredients.

I pulled out my Kite Hill (no affiliation) Chive Cream Cheese which is plant based (almonds), gluten and dairy free.  It’s absolutely delicious.

I tossed in a quarter cup of the Chive cream cheese and half a cup of almond milk and the best ever cream sauce was done.

Eggplant Noodles with Chive Cream Sauce might be incredibly delicious but it’s a little boring.  Adding more colorful, healthy and flavorful vegetables would make Eggplant Noodles more than a simple dish, it would make it a masterpiece of culinary perfection.

(ok…that’s a bit much but just go with it)

Next to my desk I have a paper with  graphic of the protein values of various foods.  There are a dozen in all, and two of the foods features are spinach and mushrooms. 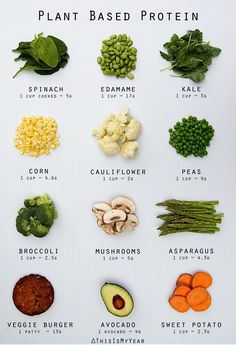 Adding Mushrooms to the Eggplant Noodles

I cook a lot with mushrooms.  Our family loves mushrooms.

Mushrooms have 5g of protein per cup.

Mushrooms were definitely going into the dish. Besides, mushrooms are often paired with eggplant.  Especially because I say so. 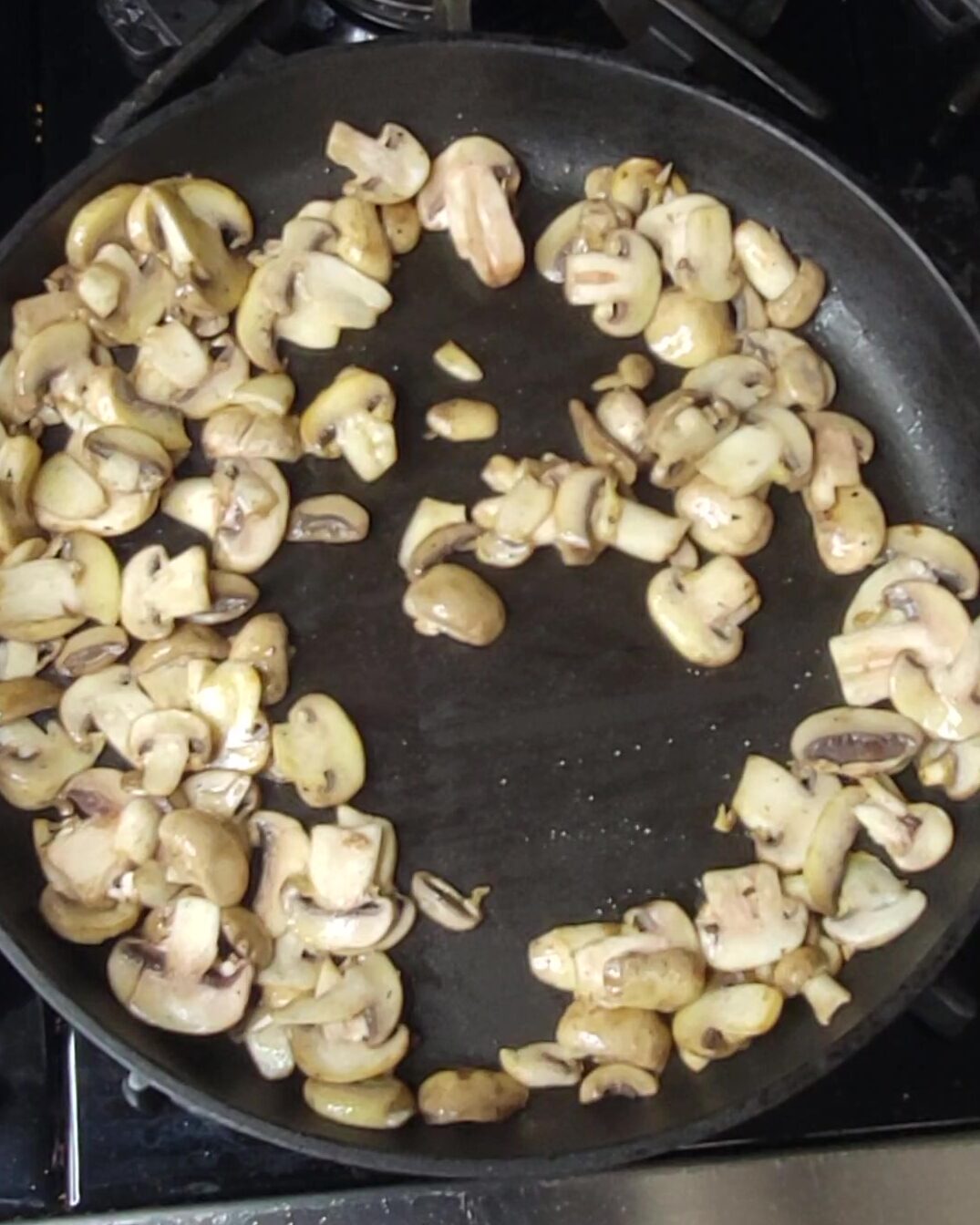 Sauteed Mushrooms are perfect for Eggplant Noodles with Spinach and Mushrooms.

Including Baby Spinach in the Eggplant Noodle recipe

Let’s just say that sometimes when you’re in the store and you’re looking for things to eat, especially when you’re hungry, you just throw stuff into your cart that you think you might eat during the week.

On that little chart next to my desk it says that spinach contains a whopping 5g of protein per cup.

If we go back to the whole concept so eloquently described in the last paragraph, I had some gorgeous Trader Joe’s Heavenly Villagio Marzano Tomatoes. 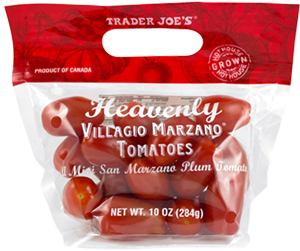 They’re small and oblong and cut into half they’re the perfect accompaniment to the eggplant, spinach, mushrooms and cream sauce.

I’m a big fan of green onions, so I put sliced green onions in this dish to give it a little more flavor and to compliment the chives in the sauce. 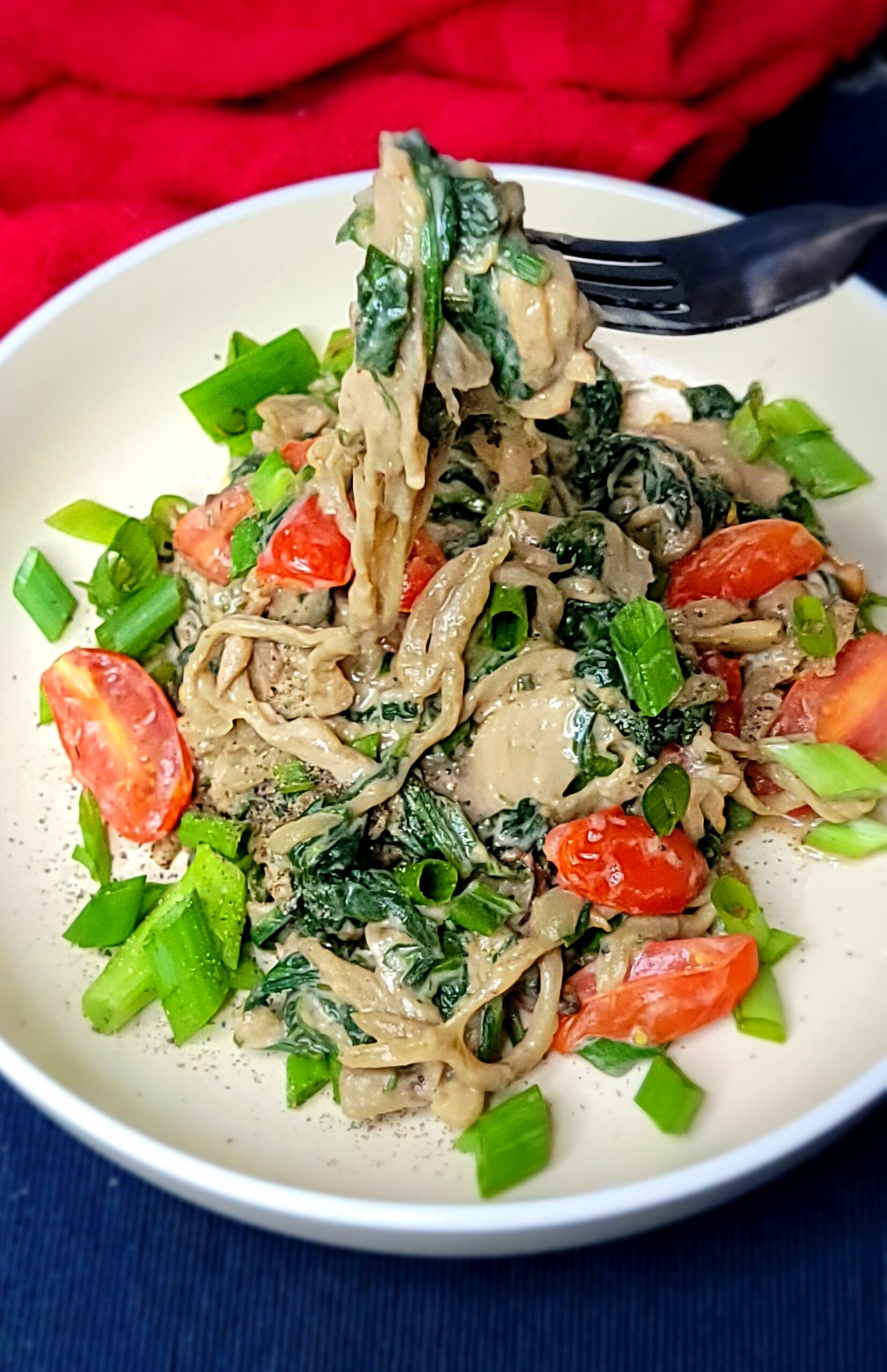 Eggplant Noodles with Spinach and Mushrooms. You’d never guess that those gorgeous noodles are eggplant! Check out the colorful spinach tomatoes and sliced green onion. YUM!

Here’s the recipe for Eggplant Noodles with Spinach and Mushrooms

As always, you can add other vegetables to the Eggplant Noodles or just eat them plain.  You can double the recipe easily for a dinner main. 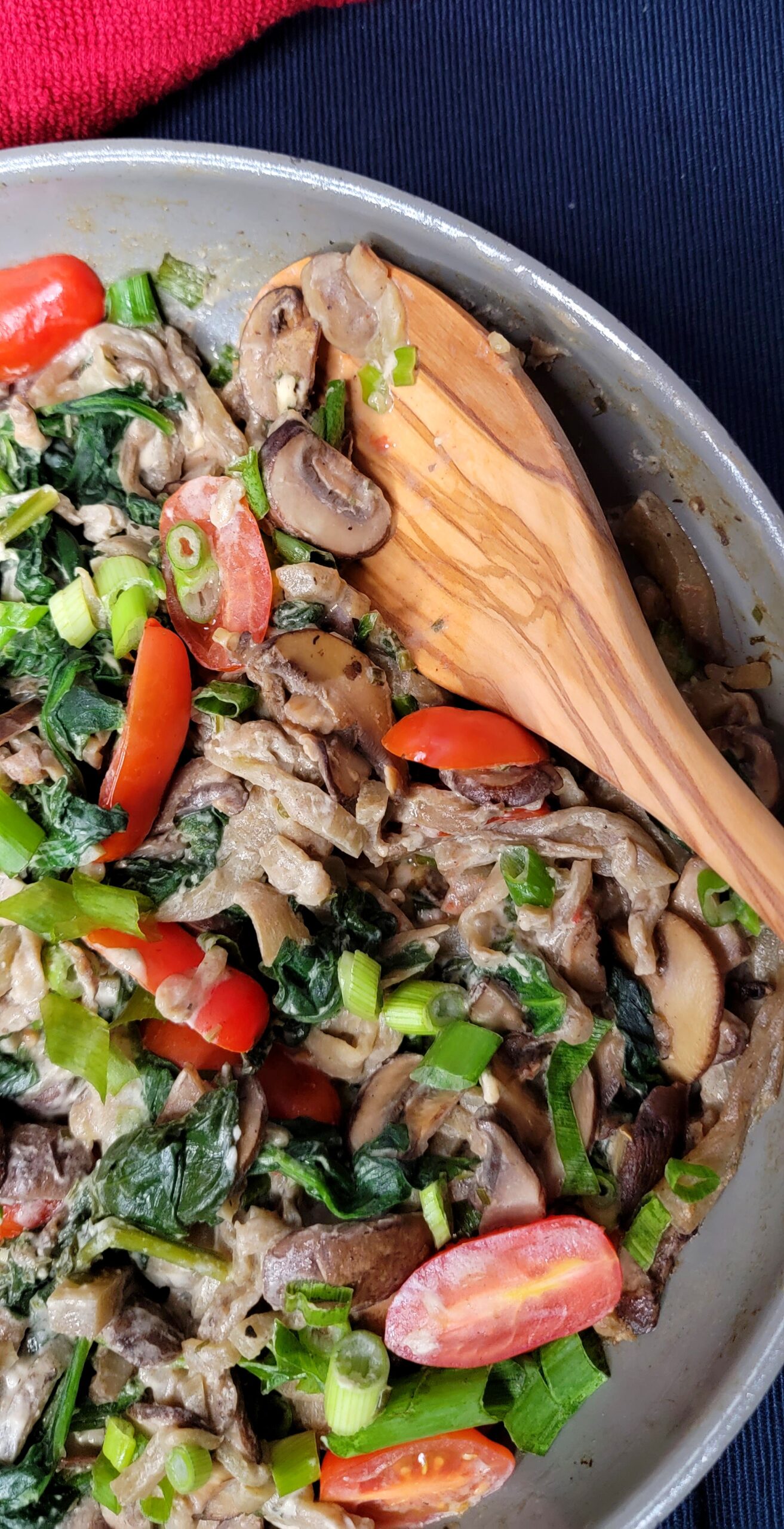 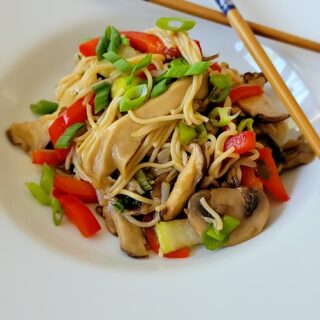 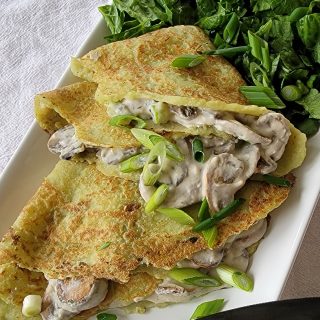 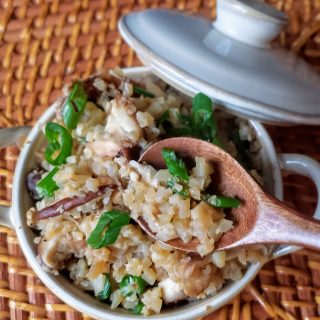 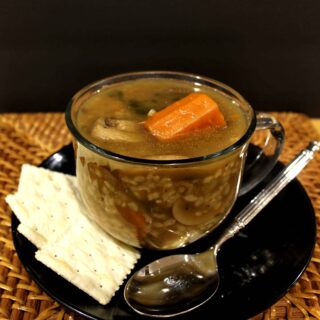 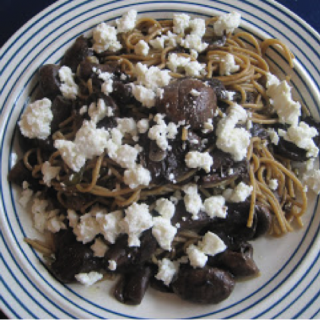 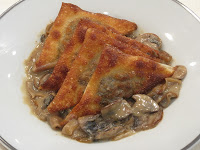 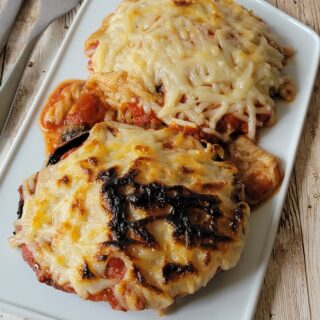 You can find all my Cookware and Bakeware including ones like the HexClad 14 Inch Hybrid Stainless Steel Frying Pan with Lid, Stay-Cool Handle – PFOA Free, Dishwasher and Oven Safe, Non Stick with lid on my storefront. 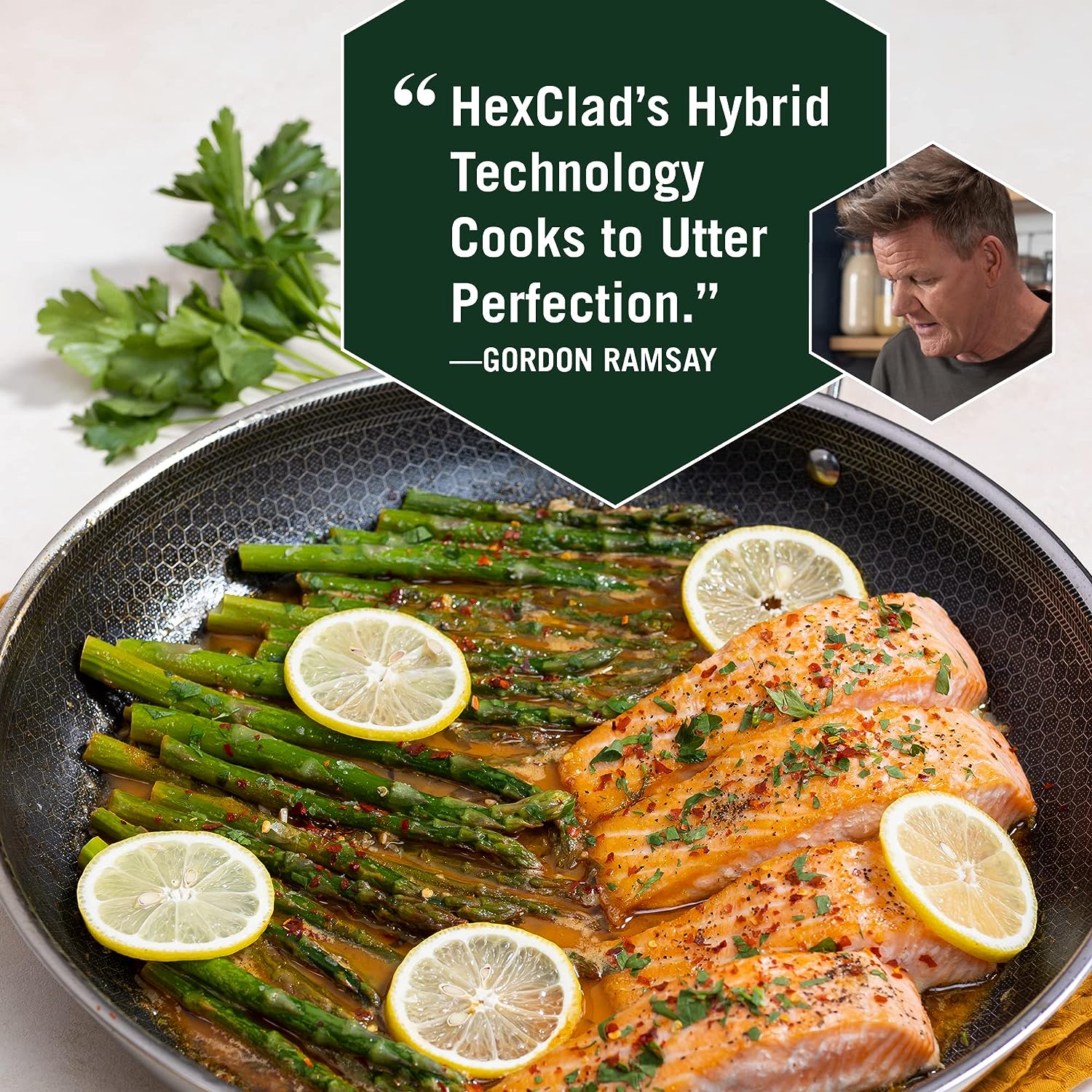 Additionally there is a  Small Appliance Storefront with many awesome small appliances that I recommend for your kitchen…even if you have a small space! 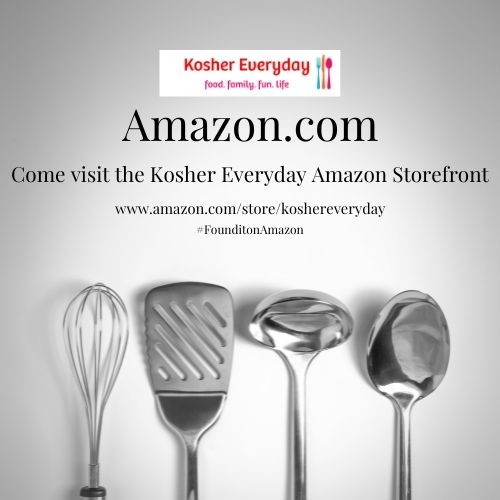 Oh and because I love Hast Knives and have a media affiliate relationship with them you get a 15% discount for using the code KED15 when you order: 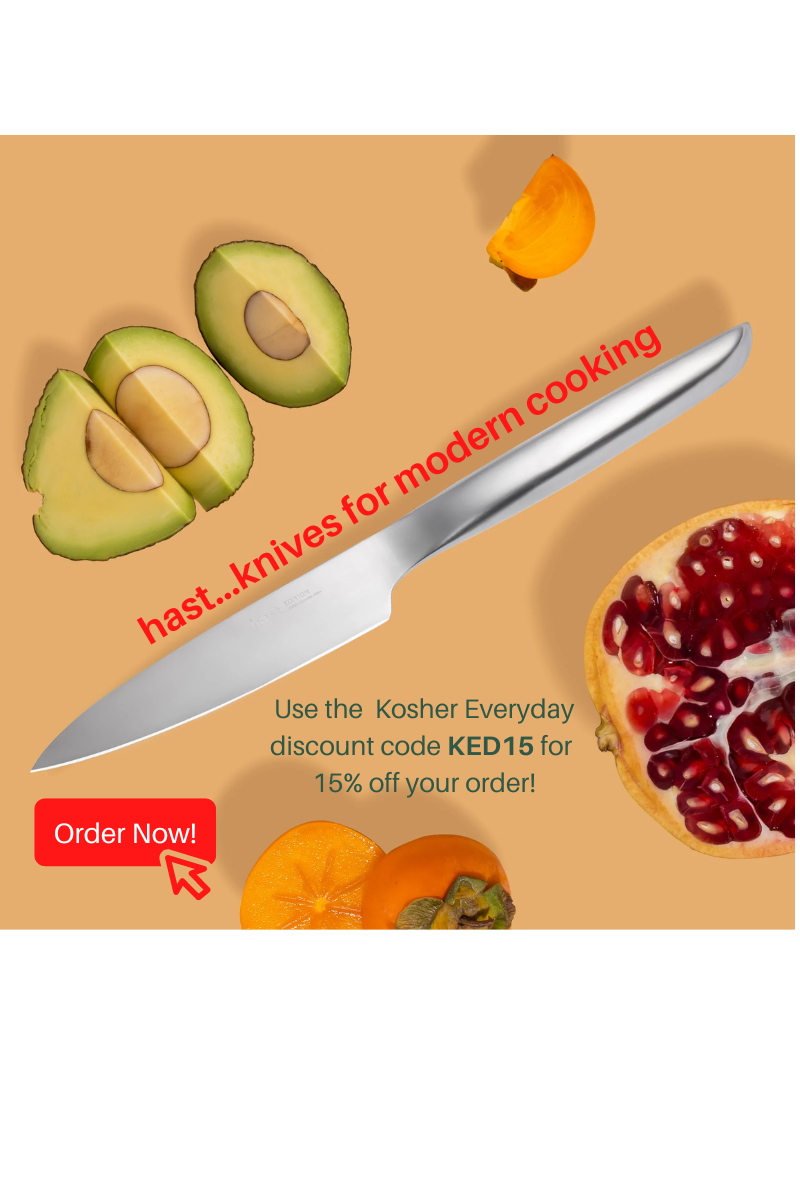