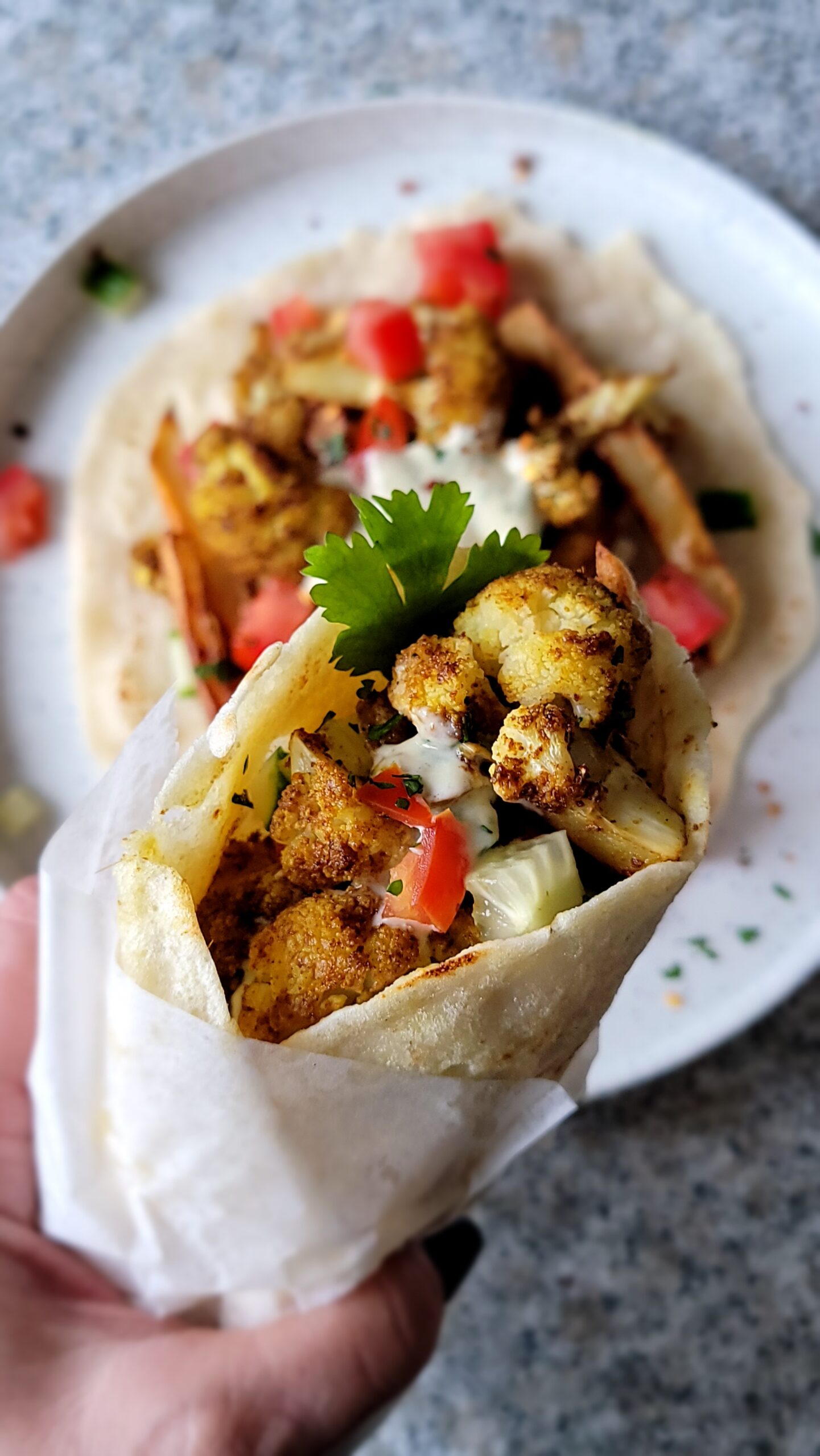 I’ve been seeing recipes for Cauliflower Shawarma floating around for a little while, like in the Chicago Tribune and New York Times, and I’m intrigued.  For those Flexitarians, or vegetarians, or people who just want to eat healthier, the concept of substituting cauliflower for lamb or turkey in a shawarma is an interesting one.

As someone who has eaten her share of authentic Shawarma Laffa’s in Israel and at Kosher Middle Eastern restaurants here in Chicago, I know what a Shawarma Laffa is supposed to taste like.

I happen to love Shawarma. 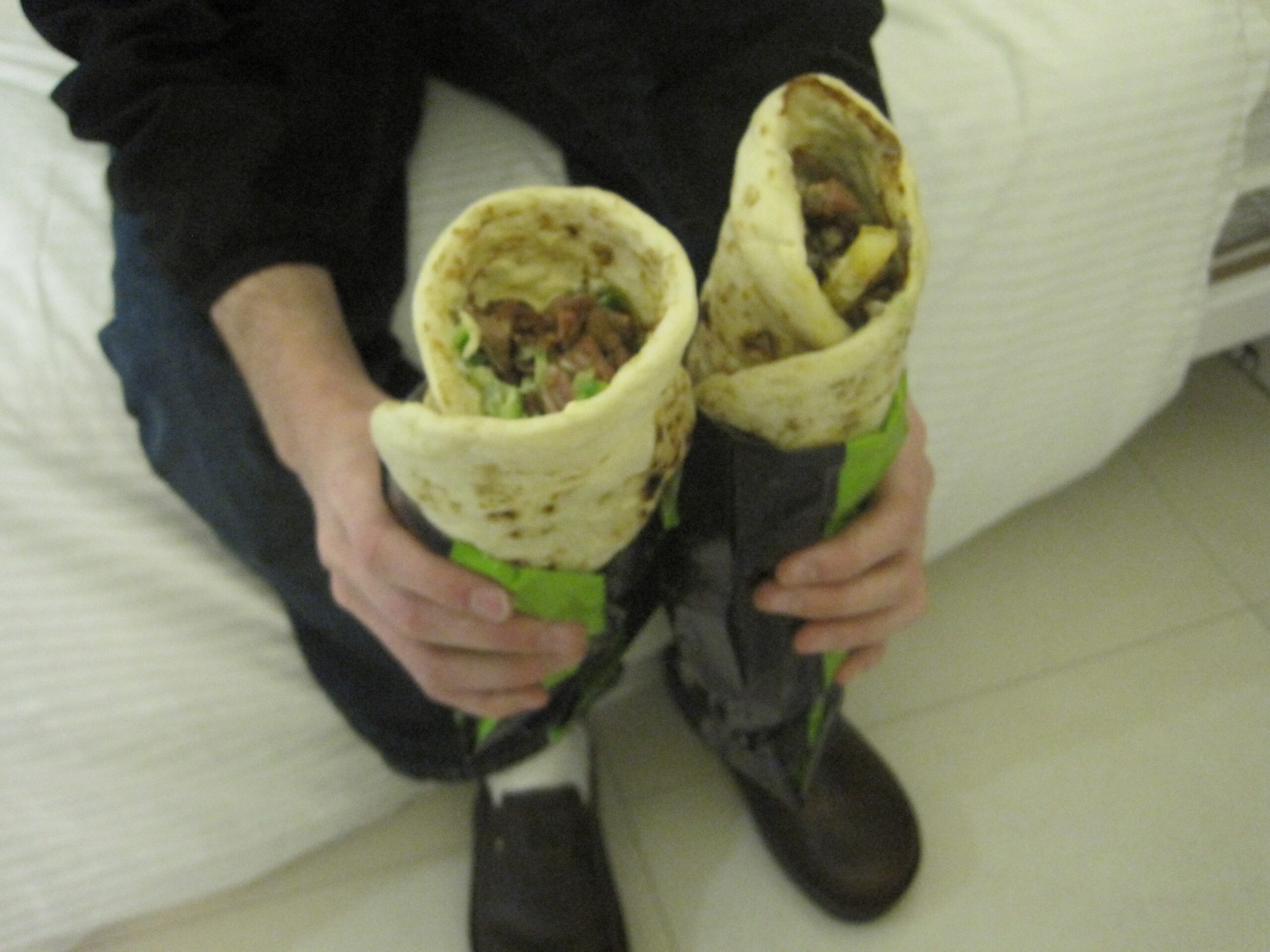 Authentic Israeli Shawarma all the way back from 2012! It’s still as incredibly delicious today!

The Challenges in Making Cauliflower Shawarma

The truth is there aren’t a lot of challenges in making Cauliflower Shawarma.  When I made mine, I simply roasted cauliflower with oil, ready made (Kosher for Passover) shawarma seasoning and called it a day. 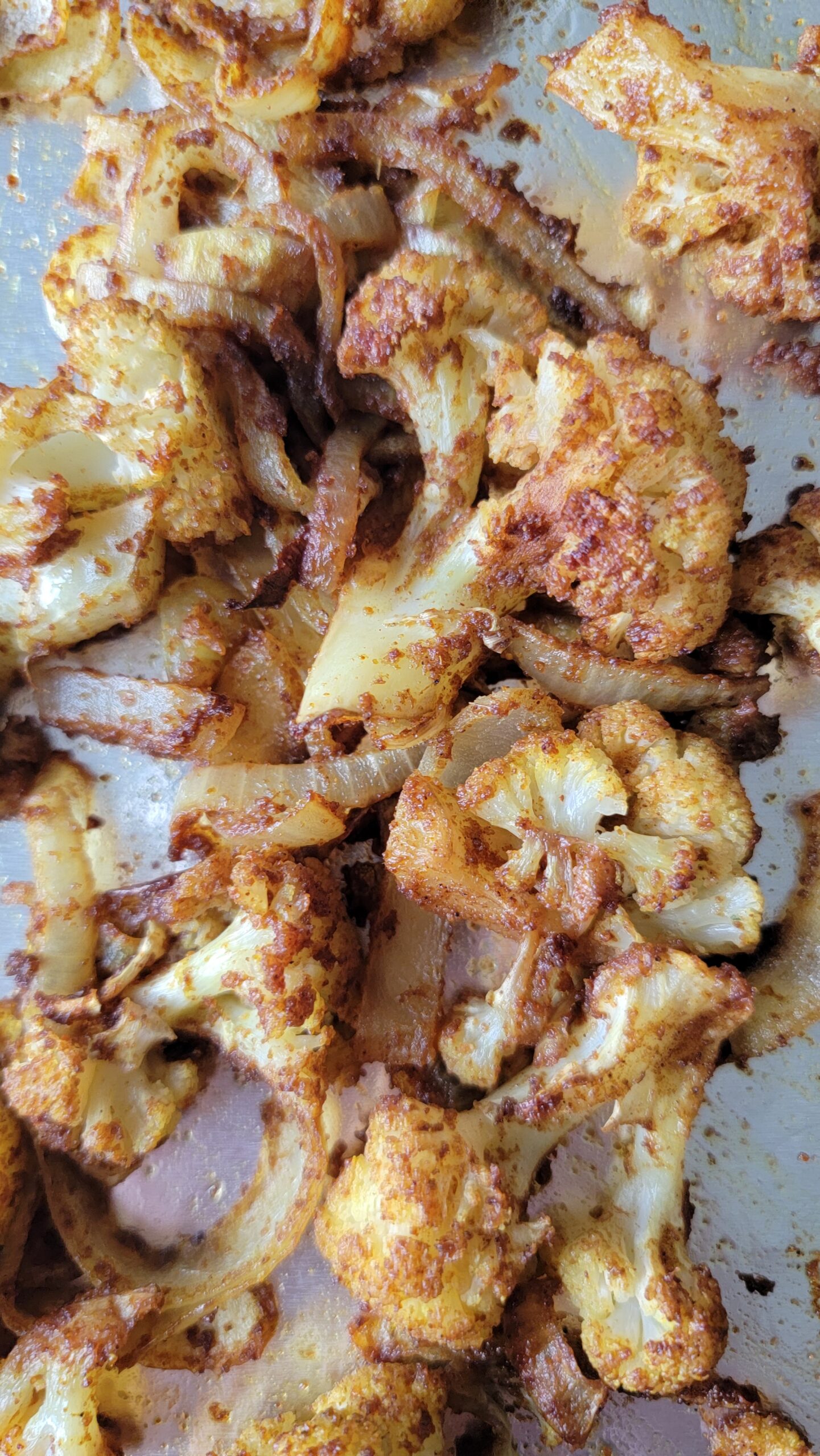 Roasted Shawarma Cauliflower – I roasted mine with sweet onions to give them more flavor.

The real challenge is in making the add-ons, like tahini and laffa, gluten free and Kosher for Passover.

Why is this Tahini different from any other Tahini

Because I’m making my Cauliflower Shawarma on Passover, and because I’m of Ashkenazi decent, I don’t eat a type of food called “kitniyot”.

Kitniyot (Hebrew: קִטְנִיּוֹת, qitniyyot) is a Hebrew word meaning legumes.[1] During the Passover holiday, however, the word kitniyot (or kitniyos in some dialects) takes on a broader meaning to include grains and seeds such as rice, corn, sunflower seeds, and sesame seeds, in addition to legumes such as beans, peas, and lentils.[2]

The bottom line is that tahini is, by definition, made from sesame seeds – which are classified as Kitniyot.

What’s an Ashkenazi girl to do?

I tried to come up with a nut that might have similar, but realistically not exact, taste to toasted sesame seeds.  I’ve used cashews in sauces before, Claudette’s Haystacks comes to mind, and I figured if I added the same ingredients that are in tahini found in a shawarma restaurant it might be pretty darn close.

The recipe started with the same ingredients as traditional tahini – nuts (instead of seeds), water and oil.  I ground those in a food processor then added parsley, cilantro, garlic powder and water.  It turned out even better than I imagined. 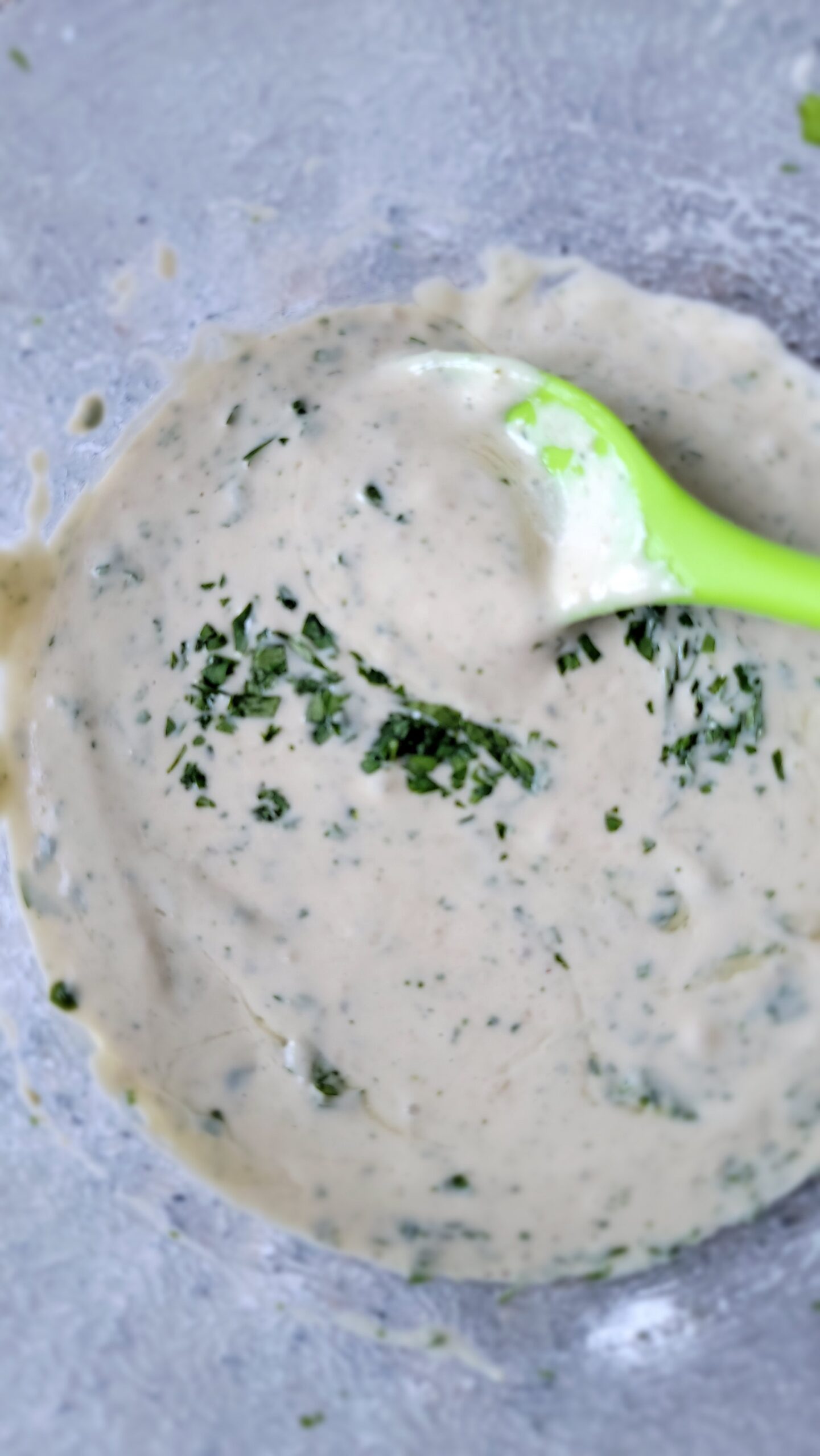 One of the major differences is that it’s ever so slightly sweeter than year round, sesame seed tahini.

I was pleased with it.

Last year I posted a recipe for Quinoa Tortillas. They’re made from quinoa flour and are Kosher for Passover.  They’d work really well in this recipe.  In fact, I was going to use them in this recipe until my dear friend, @justonebite201 on Instagram, posted a recipe for Kosher for Passover Gluten Free Laffa.  They looked SO good I simply had to try them. 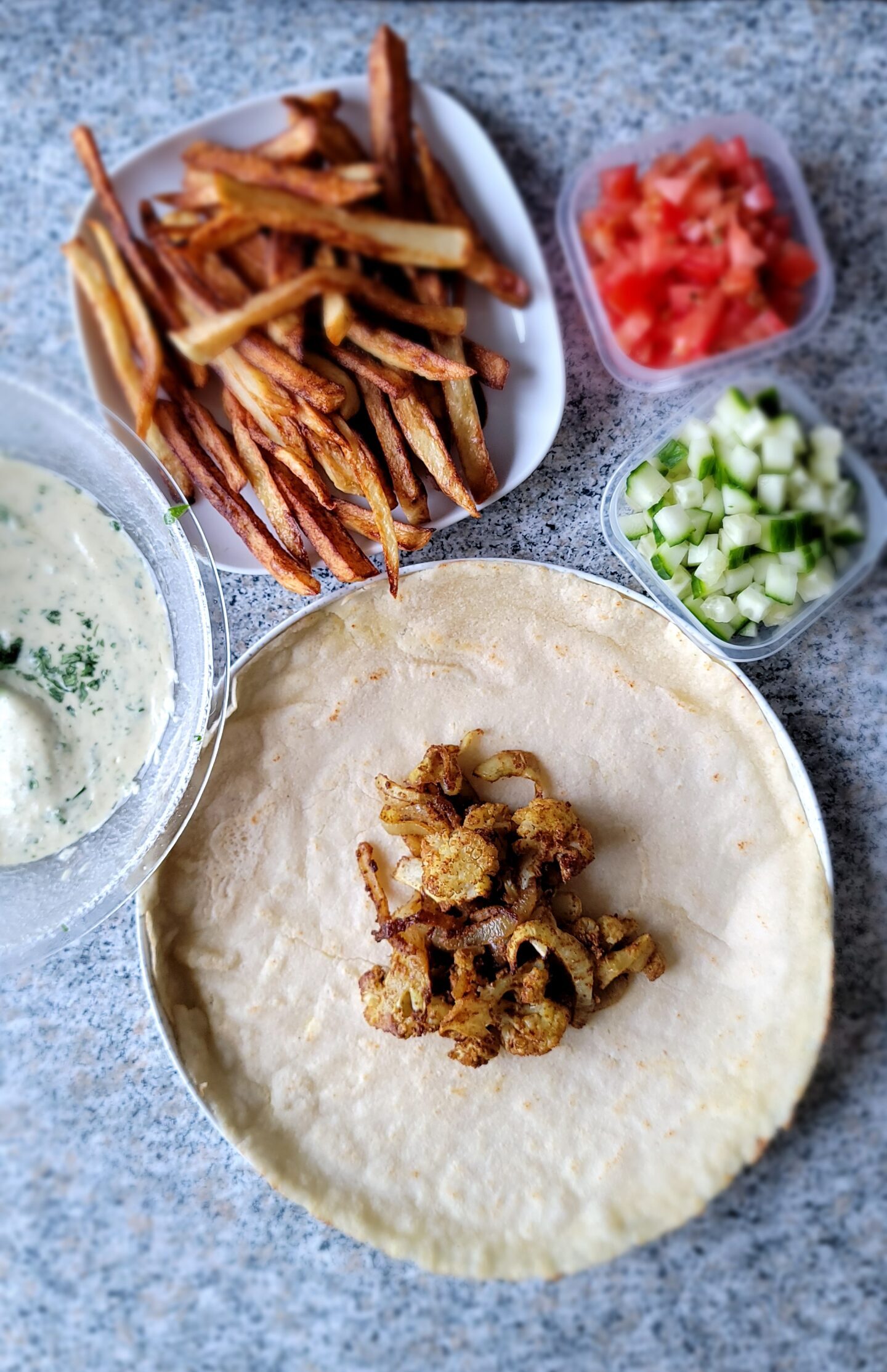 Gluten free Laffa from @justonebite201 is perfect for Cauliflower Shawarma! You can also use my Quinoa Tortillas too.

The recipe is simple, just a few ingredients, and they turned out extremely similar to glutenous wheat based laffas.  I was impressed.  I’ll add the recipe to the recipe box.

The Rest of the Cauliflower Shawarma Ingredients

A key ingredient in a good shawarma laffa sandwich are the fries.  I recently saw a post from America’s Test Kitchen for making restaurant quality fries using cold oil.  The concept was intriguing, and I decided to try it here.  I fried my homemade fries in avocado oil, starting with cold oil.  They turned out great!  I also made some using hot oil and those also turned out well.  Up to you. 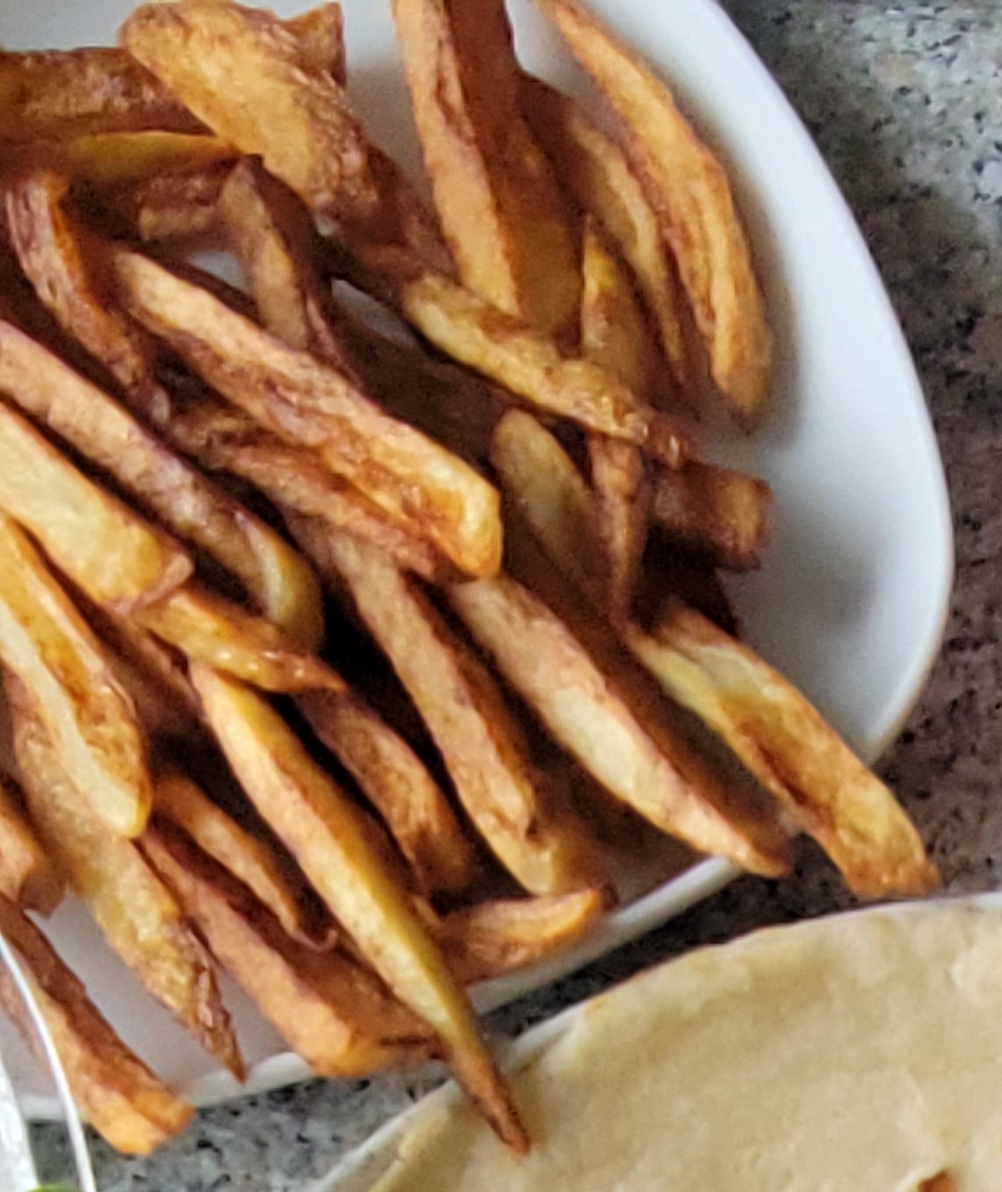 I didn’t have any pickles in the house or marinated carrots/cole slaw otherwise we could have added those as well.  During the year I might have added some spicy hummus to the recipe.  Given that it’s Passover…I passed.

It’s important to add diced tomatoes and cucumber to the laffa.  I also tossed in some crushed red pepper to simulate the schug (spicy red pepper spread) that is traditionally put in a spicy laffa.  It worked. 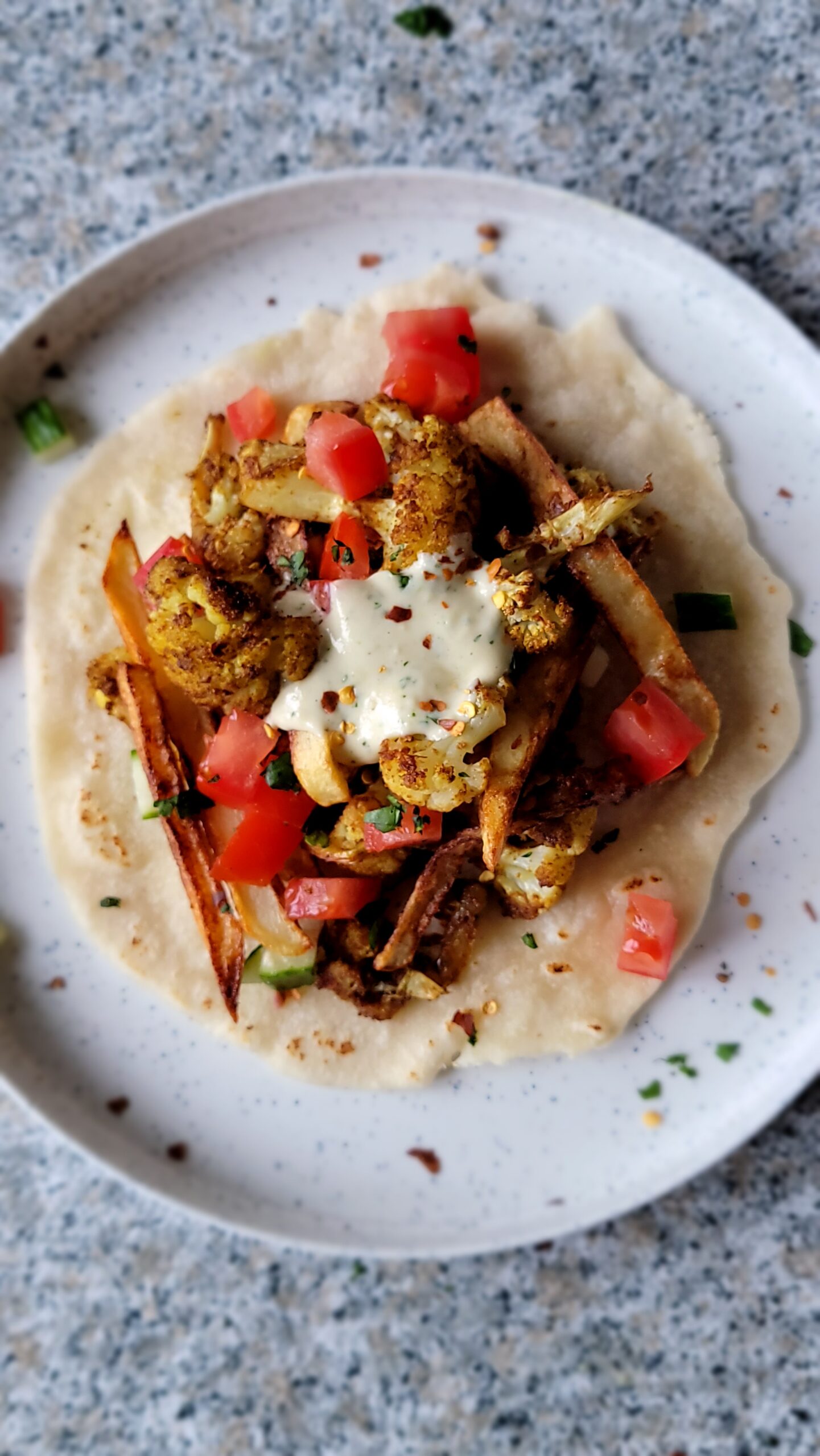 They key to a fabulous Cauliflower Shawarma Laffa is in the layering of ingredients.

Passover vs Year Round

Assuming that the Cauliflower Shawarma stays as a year-round, plant based alternative, there are a few things that I might or might not have changed if making them not on Passover.

Making these Kosher for Passover is more challenging than making Cauliflower Shawarma during the year.  I might have skipped the Cashew Tahini and used traditional store bought tahini, which would have saved some time.  Making homemade fries are always best, but in a pinch I might have used a gluten free frozen variety (gasp!).

I still would make the laffas the way I made them this time.  They’re AWESOME!

I have yet to find a kosher, gluten free laffa that is as good as this one.  Bonus that it wasn’t too complicated to make.

The recipe for Cauliflower Shawarma with Cashew Tahini

For the Shawarma Cauliflower

For the Cashew Tahini

For The Gluten Free Laffas (makes 4-5)

For the Shawarma Cauliflower

For the Cashew Tahini

For the Gluten Free Laffas

Make sure the cauliflower is completely dry before adding the oil and spices, otherwise it steams in the oven instead of caramelizing.

Feel free to double the Shawarma Cauliflower section of the recipe for fuller Cauliflower Shawarmas.

If not making this on Passover you can substitute: 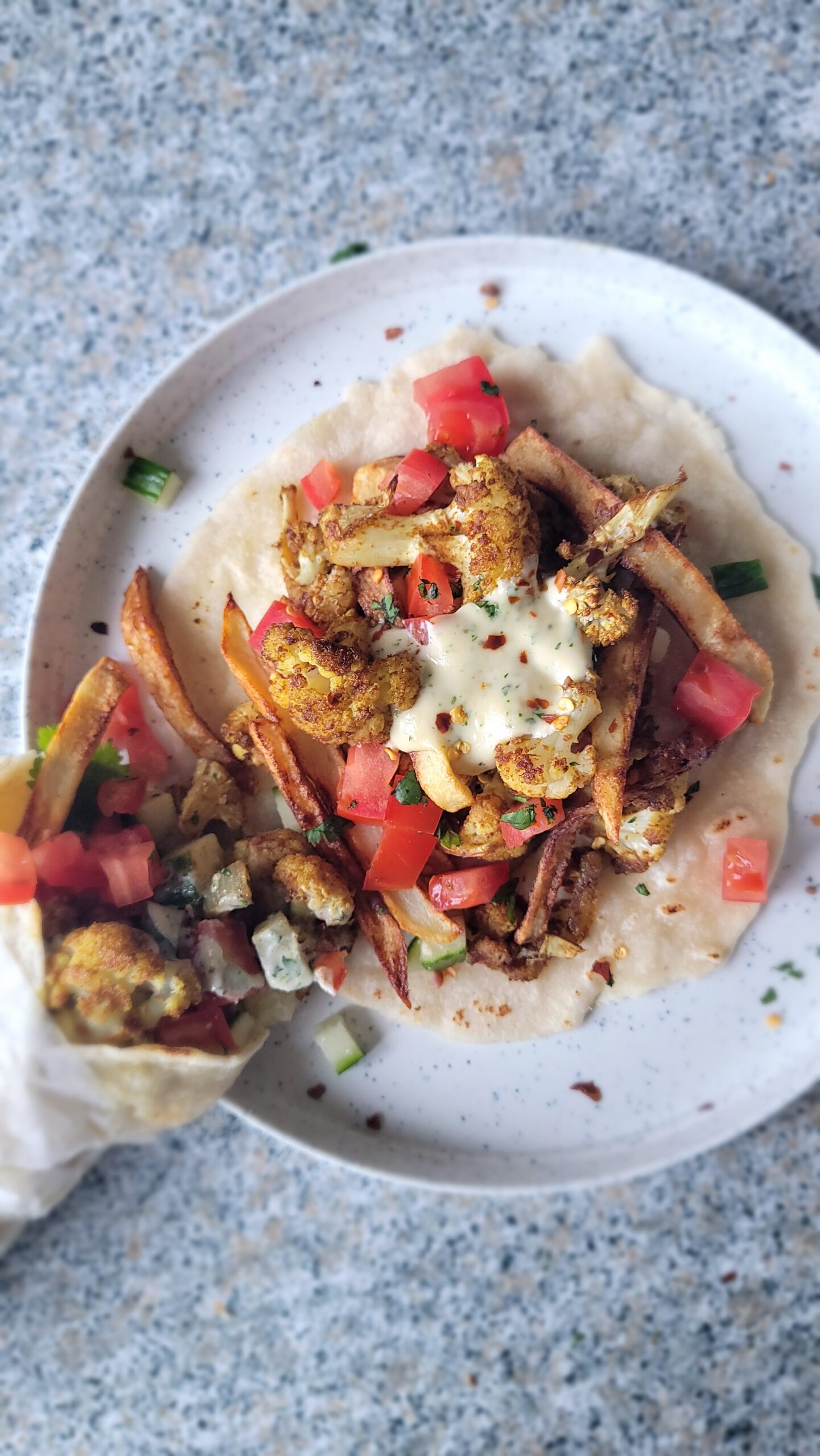 Please let me know what your favorite Passover foods are.  I’d love to hear from you! 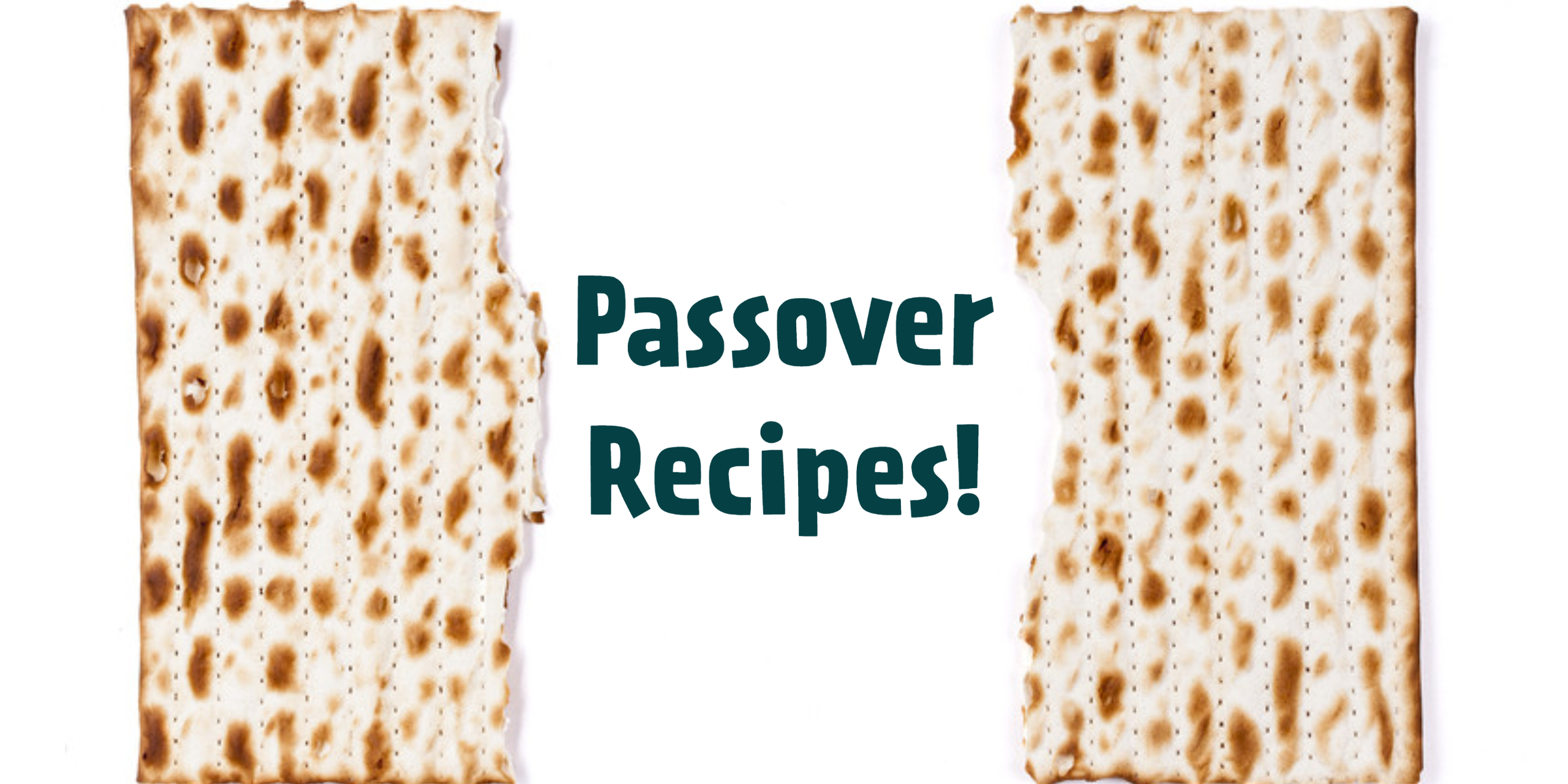 FYI: I’m here to help make it way easier for you and reduce your pressure with my book “Shabbos Under Pressure“.  I’ve found that using my electric pressure cooker to prepare for Passover, makes the cooking way easier and more efficient.  For example, instead of cooking a huge pot of chicken soup on the stove for three hours, taking up valuable space on my stovetop,  I can make even better soup in just an hour/hour and a half in my Instant Pot.  I’ve even put together a Shabbos Under Pressure Passover Recipe Guide to help you convert the recipes in the book to Passover friendly recipes.  If you don’t already have “Shabbos Under Pressure” now would be a great time to order it to ensure that you receive it with enough time to plan and cook your Passover meals.

You can order it here: 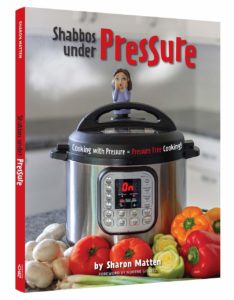 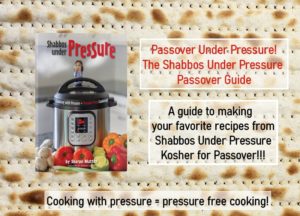 MAKE SURE TO CHECK OUT MY “I CAN’T BELIEVE THEY’RE PASSOVER BAGELS”!! 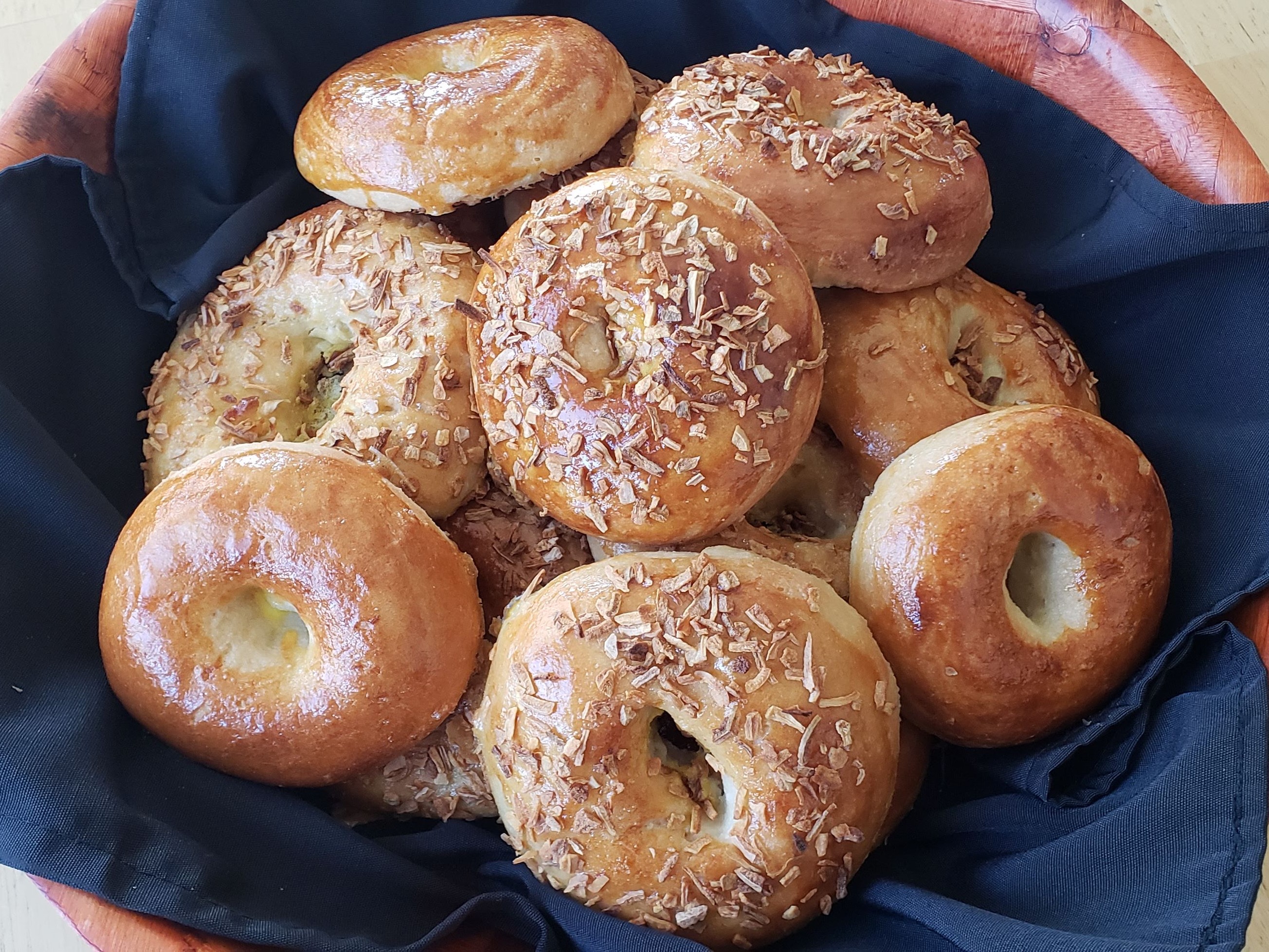 I also put a Passover Idea List on Amazon.

These are item’s I recommend to help make your Passover even more wonderful. 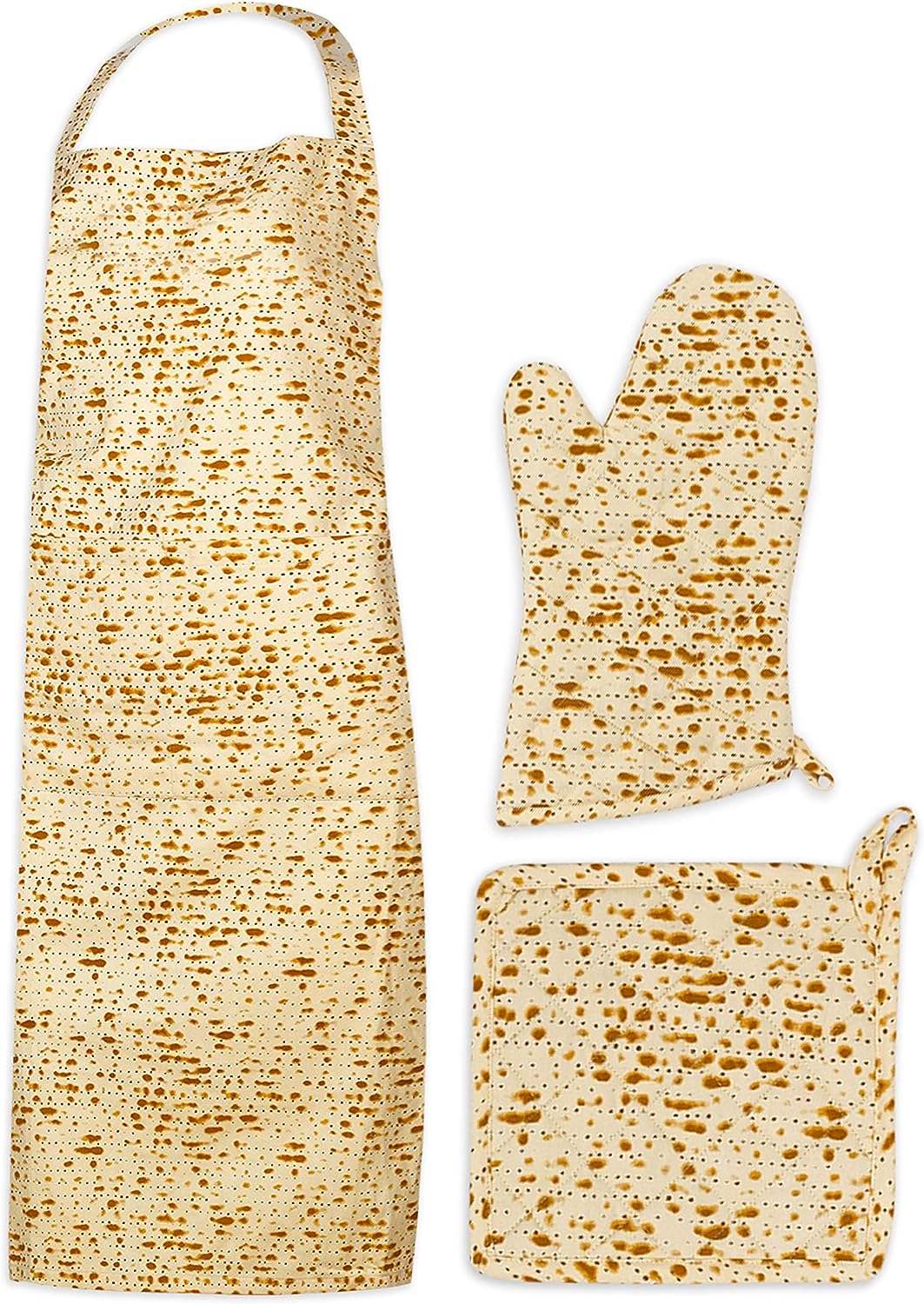