Jump to Recipe·Print Recipe
Growing up in West Roger’s Park Chicago I felt I was really blessed to have the Bnei Akiva Lishkah* two blocks away.  The Lishkah building was the gathering place for Zionistic, Modern Orthodox grade school kids, teenagers and young adults.  It was the hub of everything fun, interesting, and “cool” going on for Jewish Modern Orthodox kids in the region.  Every Shabbat morning there was a Minyan at the Lishkah with beautiful singing, but somehow we managed to daven* fast enough that the services never seemed too long and we always finished before the traditional shuls!  I have always said the Bnei Akiva here in Chicago really helped to shape who I am today.  I have a great love for the State of Israel, and a strong connection to my Judaism.
Every Simchat Torah there would be energetic (and that does not even begin to describe it) dancing in the Beit Knesset* on the second floor of the Lishkah.  You could actually feel the floor vibratingfrom the dancing, the girls danced in the women’s section too, and we were seriously afraid that the entire second floor would collapse!  After the hakafot* there was always an organized oneg* at a nearby house where the teenagers would gather in a safe but fun environment – often at my house!  We’d empty out the basement to make space for the crowd, and the foods of choice were Spaghetti with Meat and Sweet & Sour Chicken Wings.  Considering the volume of people, we made a lotof food, and it was all nearly gone by the time everyone left. 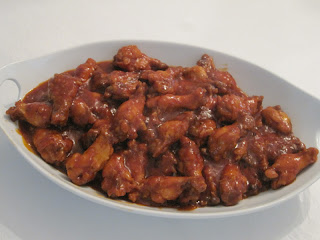 Sadly the Lishkah left West Rogers Park (where we still live) before my kids were born and moved to Skokie.  We really feel its loss as our kids are growing up.  We, however, have continued the custom of Spaghetti with Meat and Sweet & Sour Chicken Wings on Simchat Torah in our house.  Some traditions are just too good to give up.
Recently I bought a few wedeal.com (similar to groupon) vouchers for Garden Fresh Market in Northbrook (a suburb of Chicago) where they have a lot of kosher foods and even a kosher pizza shop in the store.  When I got there they had the most gorgeous looking chicken wings I had ever seen.  I know that to some of you that might sound incredibly ridiculous – gorgeous chicken wings?  Gorgeous?  Really?  YES!  I have often bought chicken wings that looked like they were about to fly away as soon as they came out of the package – ugh!  It meant a lotof time cleaning the darn feathers off of the wings for a few moments of chicken wing nirvana.  The Garden Fresh ones were clean and beautiful!!! I know that you know that when things are really crazy you need all the help you can get, and I was not going to buy chicken wings that needed lots of prep time – voucher or no voucher.  Before Shabbat I pulled out my huge wok, sautéed some delicious white onions and garlic in a little canola oil then tossed in the wings, tomato sauce, duck sauce, and white pepper.  I let the wings cook for a long time until the sauce had really cooked down and was thick and gooey.  YUM!!!  They were a huge success (as always).
It occurred to me that these wings would also be awesome for the current football season for your huge football parties – the perfect sticky finger food for the guys (and gals) who are glued to the TV for the season.  You could stir fry all the ingredients in a large wok or skillet in the late morning and let it simmer until game time.  Your guests and family will not only be super-fans of football but youas well!!
Although we miss the Lishkah a lot, we have tried to instill the values that the Lishkah represented into our own children.  We have tried to make our homeinto a Lishkah of sorts, where kids come and go and always feel welcome, continuously instilling the values that were learned in the Lishkah and serving great food too!
Glossary
Lishkah: Literally translated as office.  The Bnei Akiva Lishkah in West Rogers Park was an old two story building that was thehub of Jewish youth activity in the neighborhood.
Daven: Pray
Beit Knesset: Synagogue
Hakafot: On the holiday of Simchat Torah we celebrate the completion of a whole year of reading the entire Torah.  We celebrate by doing “hakafot” – dancing and singing around the synagogue seven times with all the Torah’s in the synagogue.
Oneg: A gathering where people hang out on Shabbat or a Holiday.
Print