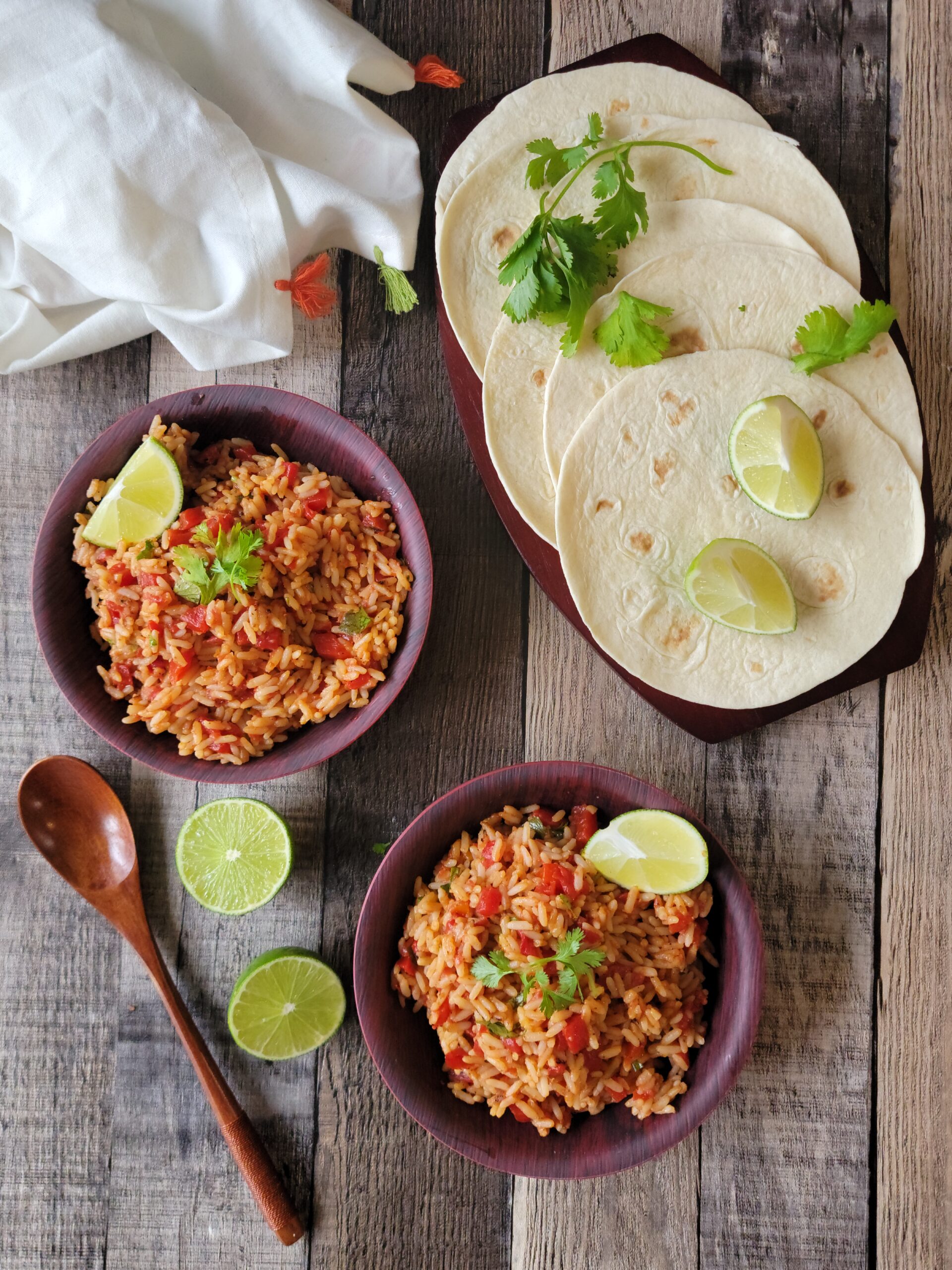 A few weeks ago, I posted a recipe for Savory Instant Pot Chive Cheesecake.  While the vegan chive flavored cream cheese made the cheesecake completely fabulous, it was the fire roasted red peppers mixed into the batter that added the extra flair and flavor. 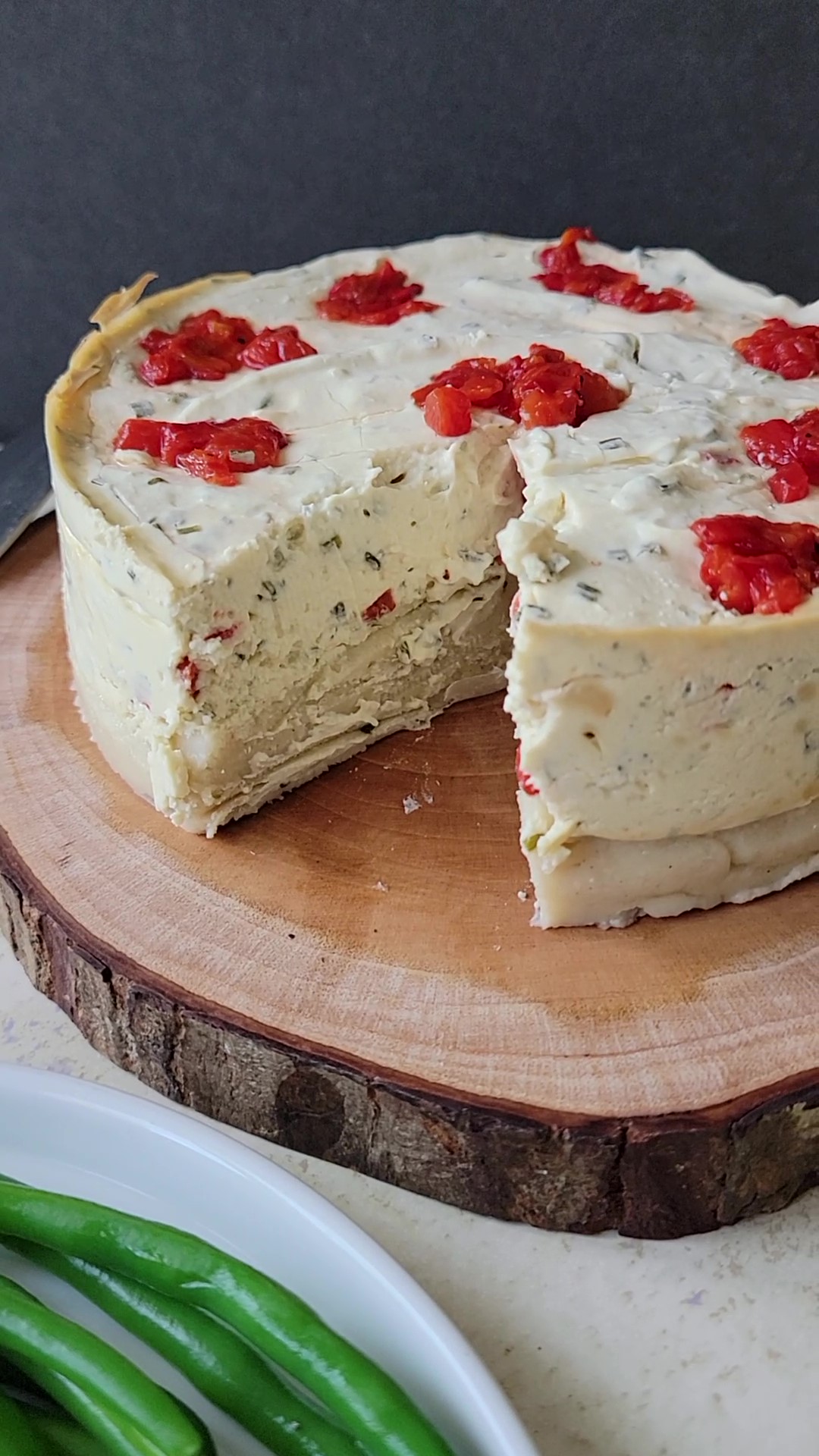 You can see the fire roasted red peppers peeking out from inside and resting on top!

What to do with the leftovers

My fridge was packed, and other people who live in the house weren’t too happy about the state of the refrigerator.

Ok…so it wasn’t quite that bad…

When cooking for the Shabbat after Shavuot, I had to get a little creative to use up the fridge contents.  I spied the can with the remaining roasted red peppers and had a lightbulb moment.

Ok…so again…I exaggerate. But you get the idea.

I had some cool medium grain rice and figured if I add the remaining fire roasted red peppers and liquid to the rice before it cooked, it might be tasty.

While it sometimes seems that we “food magicians” conjure up recipes at the drop of a hat, the first time we attempt them, it’s not necessarily the case.

This time it was not the case.  The rice was too sticky, a result of using the medium grain rice, and while I did add the expected ground dried cumin to the recipe, the final dish wasn’t quite as “Mexican Rice” tasting as I had hoped.

This recipe had been an attempt to clean out my fridge.  If I wanted to really make it a quality dish, I had to do some research and start almost from the beginning.

And so I began again

Back to the store for more fire roasted red peppers, and back to the drawing board.  I did some online research to see how other foodies made their versions of Mexican Rice.  A few things became clear.

Here is where my twistiness came in.  The flavor of the fire roasted red peppers in the recipe was fantastic.  I figured I could use fire roasted tomatoes also to increase that awesome fire roastedy taste.

By blending the fire roasted tomatoes, I was adhering to the spirit of the traditional Mexican Rice recipes. 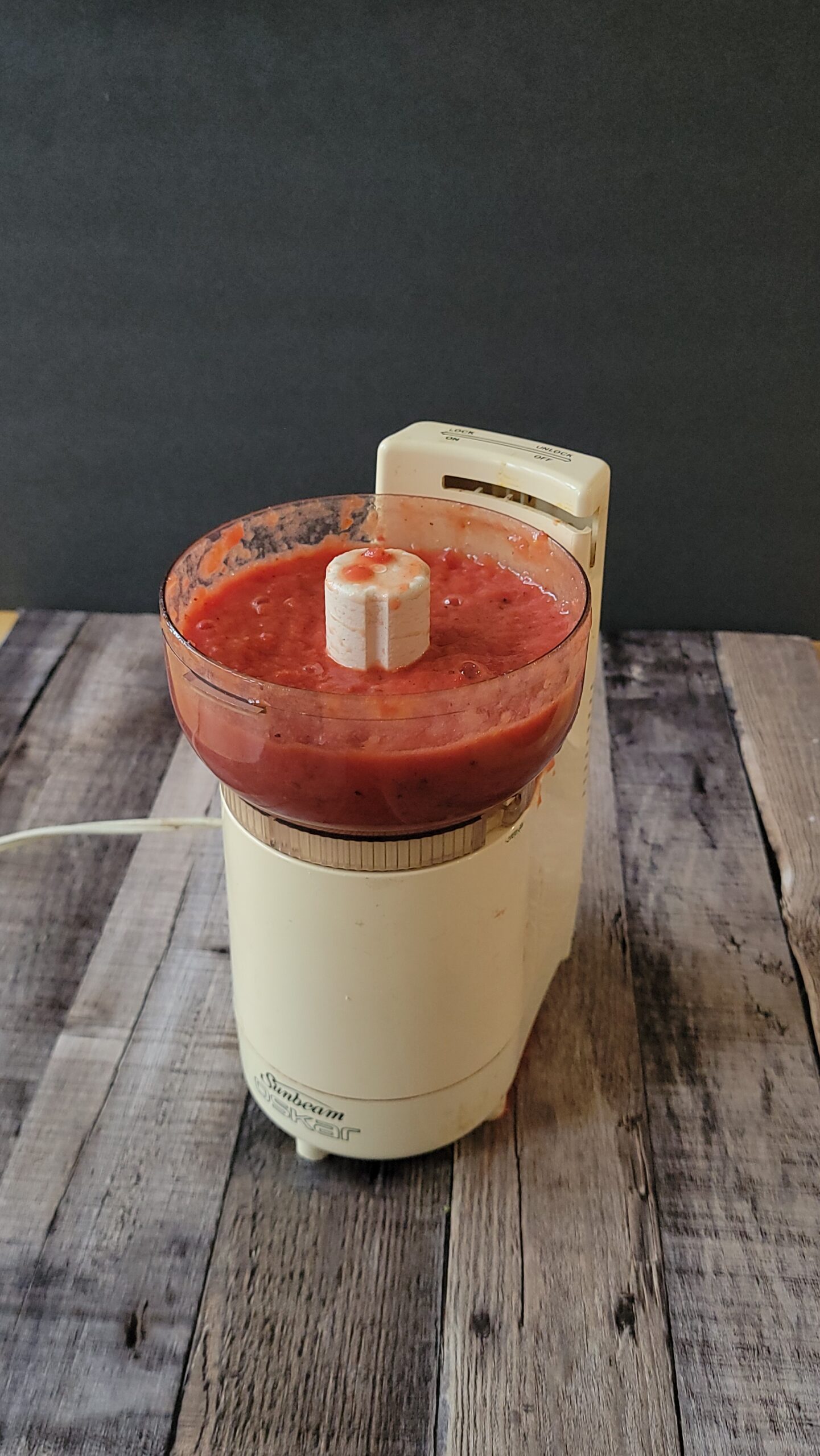 One can of fire roasted tomatoes makes around a cup and a half of sauce.

Additionally, I increased the cooking liquid flavor by not only adding the blended tomatoes, but by using the drained liquid from the fire roasted red peppers.

This left me with about 3 cups of liquid, leaving me with only adding an additional cup of water to the cooking liquid. 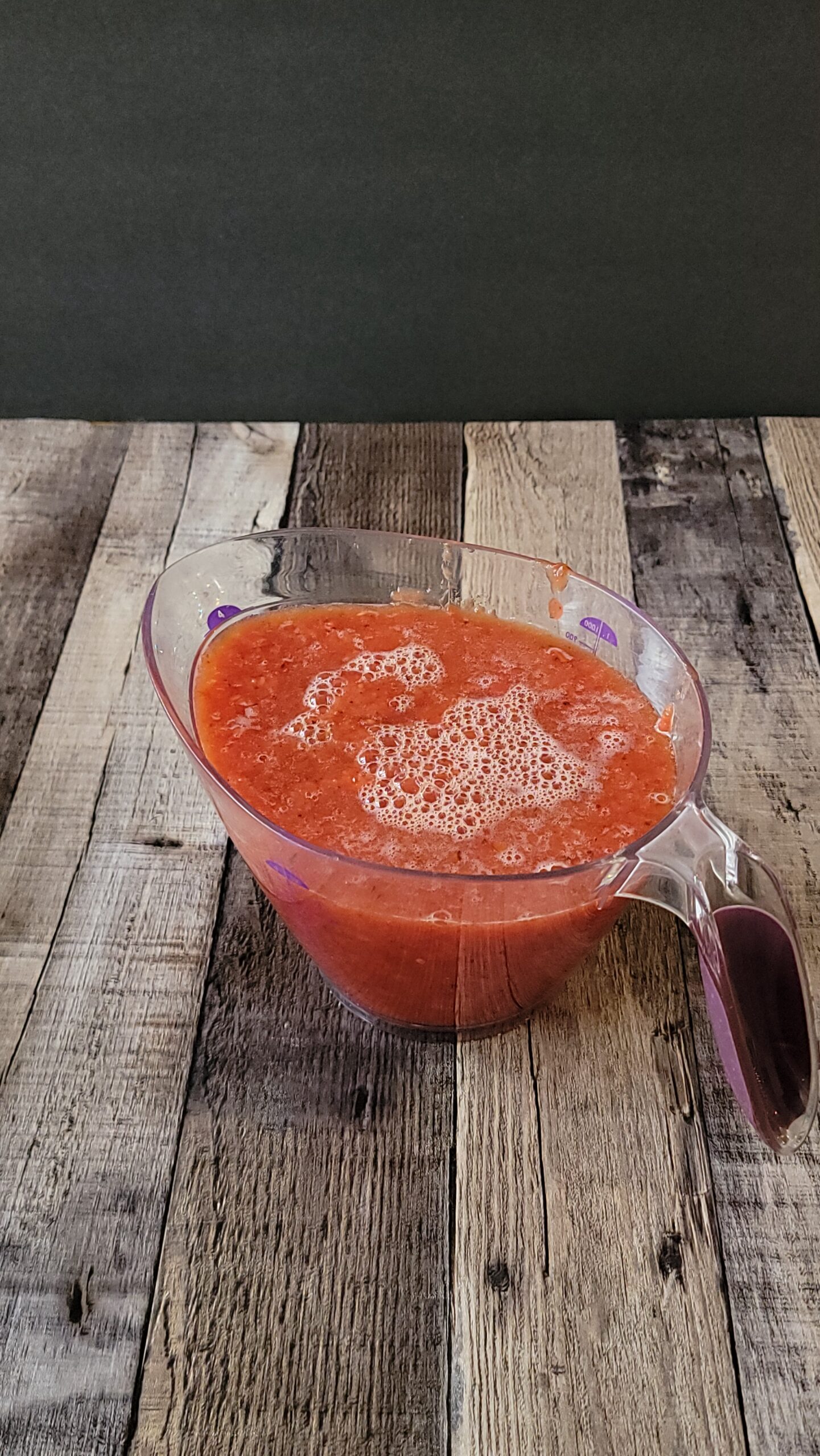 A total of four cups of cooking liquid. Check.

Tradition is tradition for a reason

When you make something the same way for many many many years, it’s probably because it works. 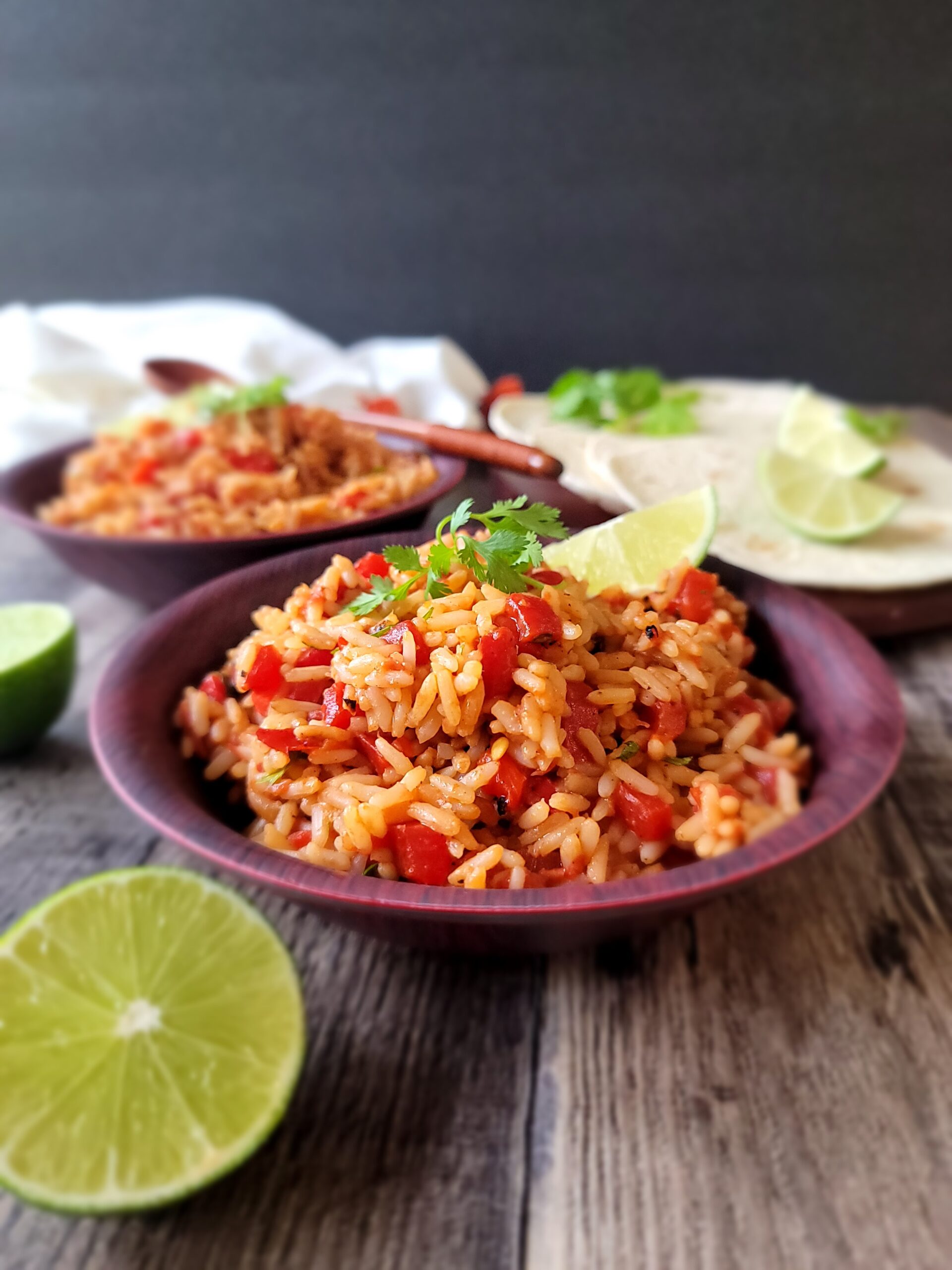 A squeeze of lime adds perfection to the recipe!

Bright red fire roasted tomatoes and red peppers give this traditional Mexican Rice more flavor and flair.  It tastes as good as it looks!

Instead of the garlic oil you can use avocado oil and 2 minced garlic cloves.

If your family is not fans of cilantro, feel free to leave it out of the recipe.

Make sure to watch the rice carefully when browning it as it can easily burn.

If you’re fans of cumin, you can add an additional 1/2 teaspoon of cumin to the recipe. 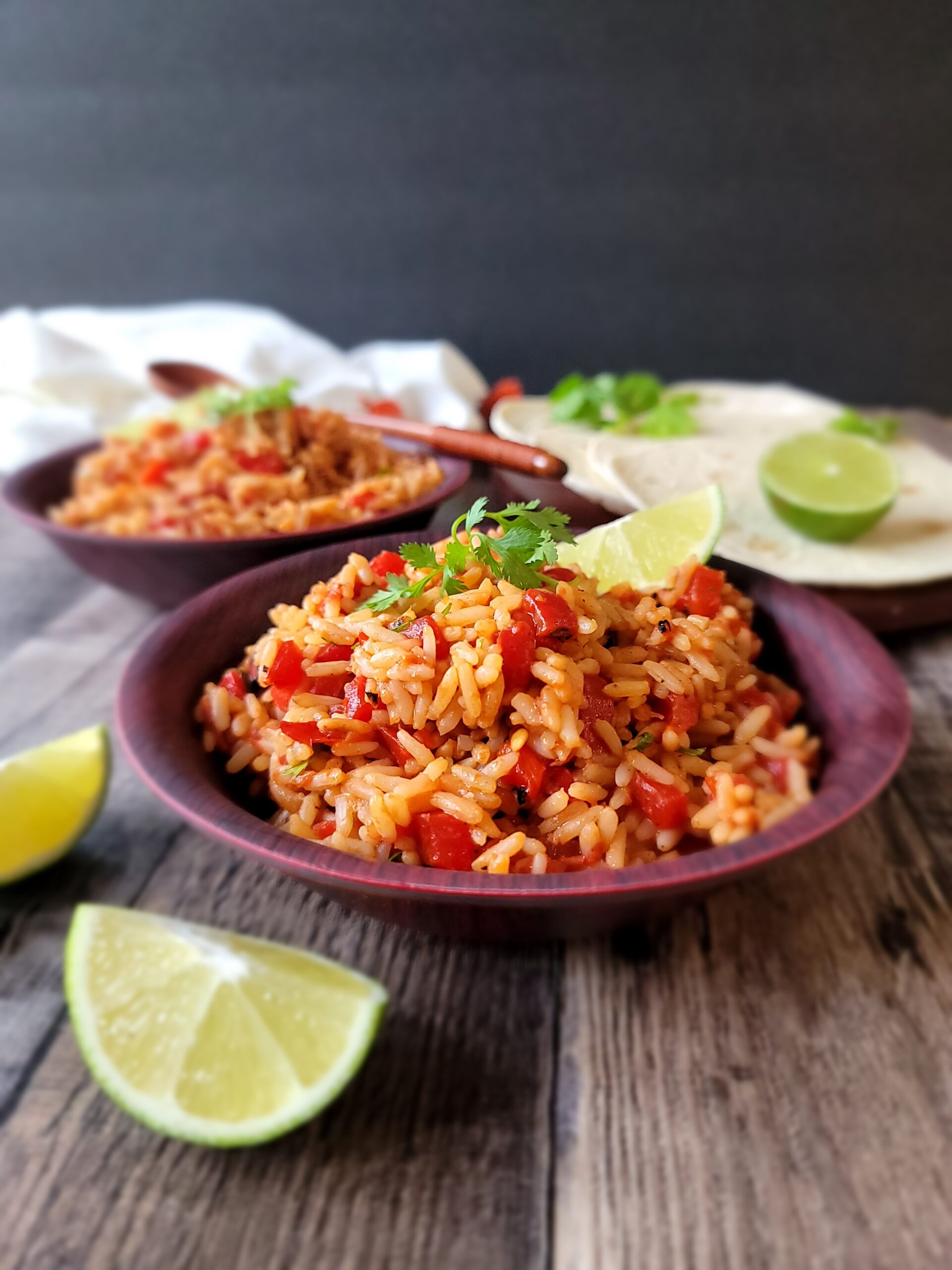 Don’t forget to follow Kosher Everyday on Instagram @koshereveryday!  You don’t want to miss all the fun and interesting posts and reels that can be found nowhere else!