It’s true.  I have a massive girl crush on Paula Shoyer. I can’t help it.  She just so…smart, nice, kind, thoughtful, hard working, thorough, precise, educated, helpful, considerate, empathetic, encouraging, creative…oh and did I mention kind and smart?  She’s a “healthy chef with a passion for pastries”.  A woman after my own heart.  I have the privilege of calling Paula a fellow foodie, and she is really an inspiration. 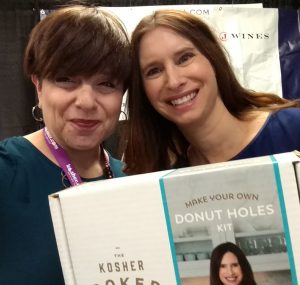 At our recent Kosher Food Media Conference, Paula was one of the keynote speakers.  She spoke about publishing a cookbook.  She talked about the elaborate process she goes through to test each recipe herself, about having each recipe tested and retested by others, meticulously reviewing the language and specifications of each recipe.  For Paula, it’s not just labor, but a labor of love.  In engineering speak, this is a six sigma cookbook!  And so…I have a massive girl crush on Paula Shoyer. 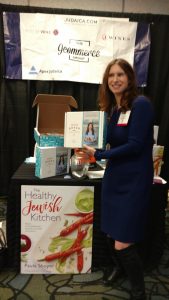 I was exceptionally excited when Paula came out with her fourth new book “The Healthy Jewish Kitchen”.  It might seem like “Healthy Jewish Kitchen” is an oxymoron.  Let me tell you…Paula is no moron!  The Healthy Jewish Kitchen is filled with delicious, healthier options for today’s home chefs.  Who wouldn’t want to eat a Winter Red Salad, or Israeli Herb and Almond Salad, Sourdough Challah, and Shnitzel with Nut Crust.  There are menu suggestions for those that need a little planning help for the holidays.  The recipes are made with only natural and nutritious ingredients.  The color photos for the recipes are beautiful.  I’m not the only one that loves this book…Paula was a featured guest just this week on Good Morning Washington!!!!!  How cool is that???

In honor of Chanukah I, like everyone else who loves Paula Shoyer and The Healthy Jewish Kitchen’s recipes, am making Potato and Scallion Latkes with Pickled Apple Sauce – from scratch!!!  One of the things I really liked about this recipe is that you can use a food processor (whew…that makes things way easier), and you can keep the skins on the washed potatoes – no potato peeling.  The ingredients are given in quantity and weight/volume.  If the recipe calls for 3 medium potatoes, you can make sure that you really have 3 medium potatoes by weighing them.  If you’re like me you will realize that the 3 potatoes are really small potatoes and actually don’t make up the necessary pound and a half needed (as indicated with the quanitity of three medium potatoes). Good thing that was specified! 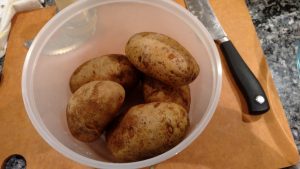 I needed five potatoes for a pound and a half…I guess they were small not medium sized!

The latkes are baked, not fried – so they are lower in fat and calories right from the start.  Did I mention they were incredibly delicious?  Tasty.  Crispy. Fresh.  Potatoey!!!  My only advice (which I always give), is to make sure to read the recipe all the way through, and have all the ingredients on hand before you start.  Thanks Paula – this recipe is pretty foolproof (a.k.a Sharon-proof!).  The Pickled Apple Sauce was so uniquely interesting, and yummy.  Someone hid my cinnamon sticks (really they did…I had them…they just weren’t where they were supposed to be) so I ended up substituting a little ground cinnamon instead.  Sorry Paula – it still came out great though. 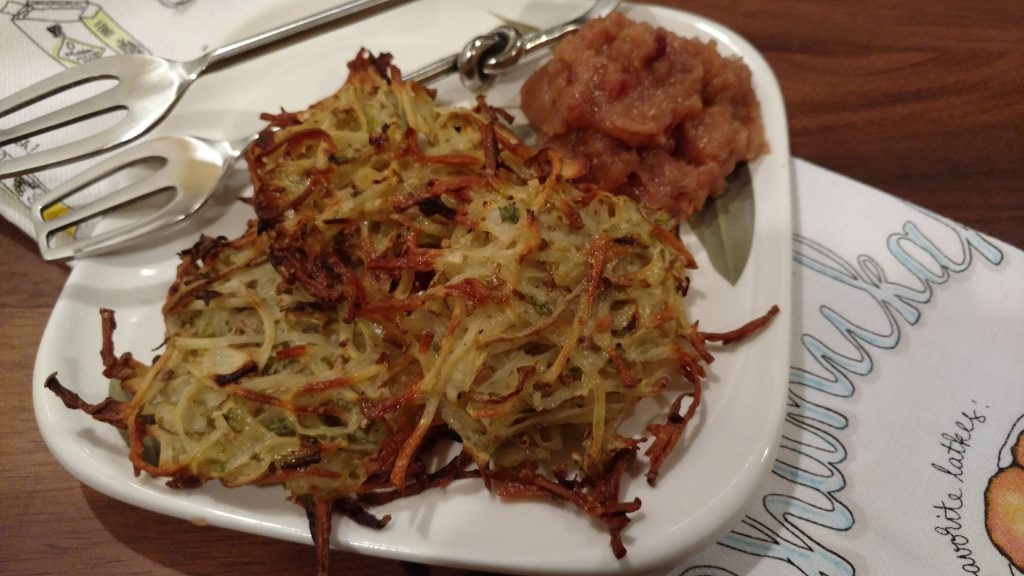 I’m starting my own little Paula Shoyer fan club here in Chicago.  I’ve already got a few members…want to join?  Here’s a link to the membership form (the picture is a link -click it!!):

This is an awesome book – I really can’t recommend it highly enough.  Click the link…get the book!  Oh, and if you still need some Chanukah gifts…click the link!!!  It comes right to your door.  It doesn’t get easier than that – and it’s healthy too!!!

And just so you know – I didn’t get paid to do this review (really!)., Paula gave me her book…and that was enough for me.  I think it has something to do with the platonic girl crush thing….

Here’s the recipe just in time for the rest of Chanukah: 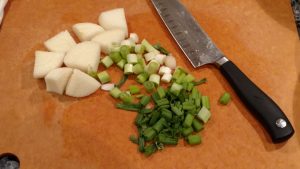 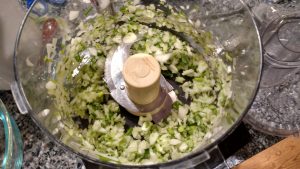 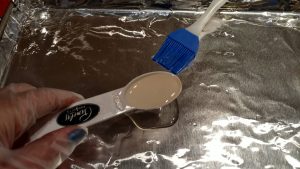 Oil the pan – I found it a little easier to use a pastry brush to spread the oil….

I needed five potatoes for a pound and a half…I guess they were small not medium sized! 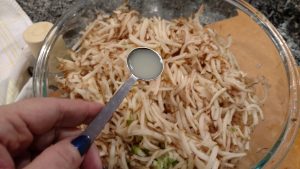 Shredded potatoes and the rest of the ingredients… 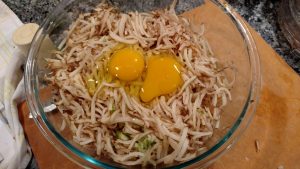 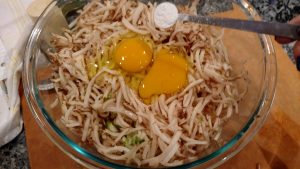 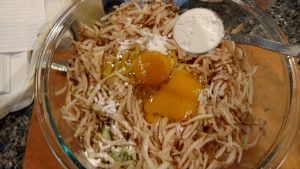 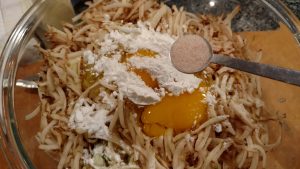 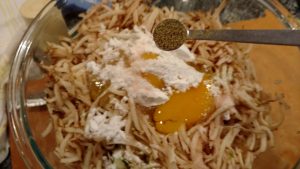 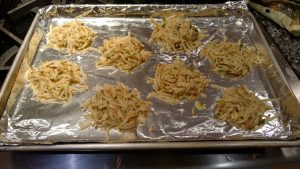 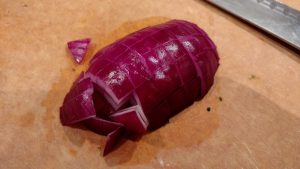 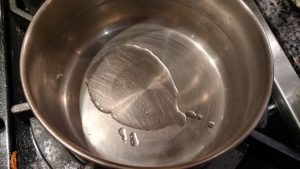 Heat the oil in a small pot… 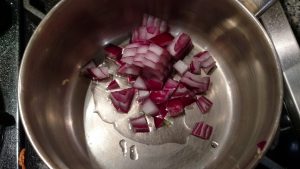 Add the onion…then after a few min… 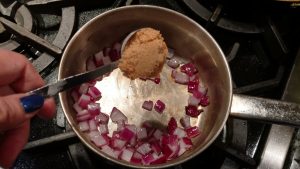 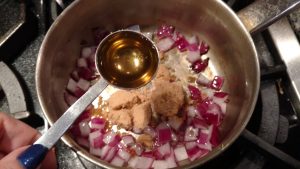 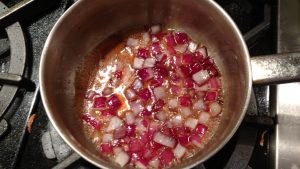 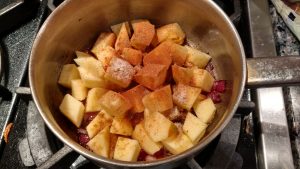 Add the apples…then cook covered until the apples are soft… 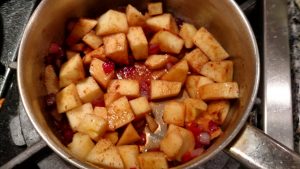 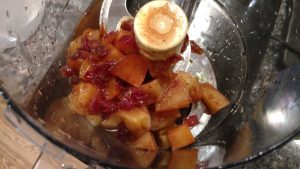 It’s all part of the process… 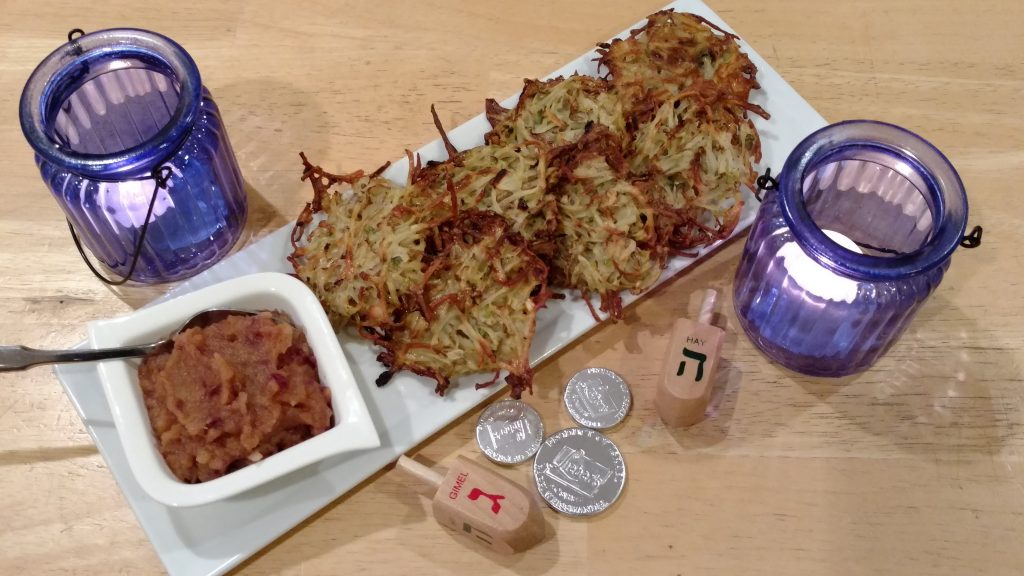 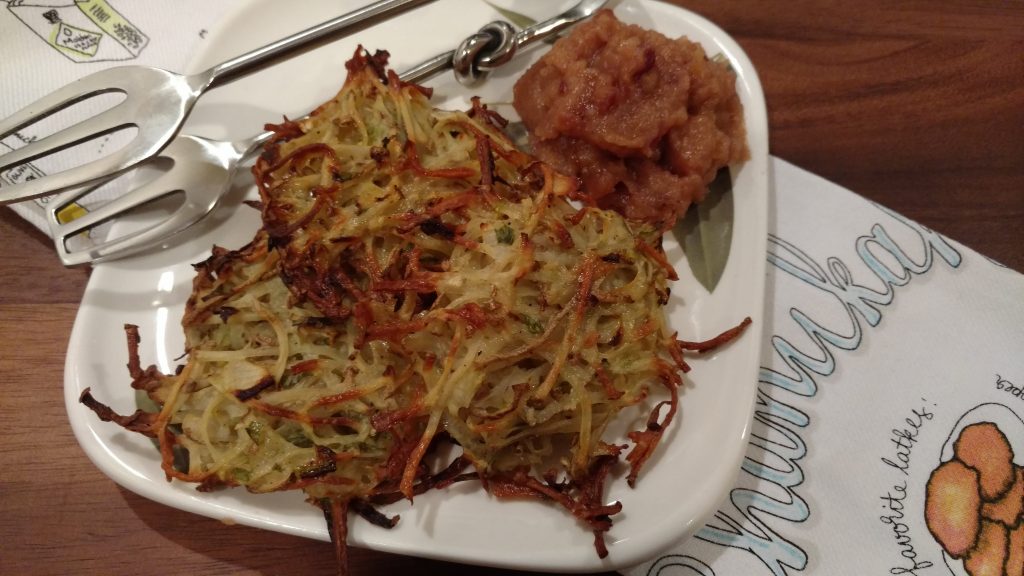 Smile…it’s a close up!!! Crispy and delicious!!!