Imagine you're family or guests sitting down to the first Rosh Hashanah meal.  There's so much tradition and symbolism wrapped up in it.  At your place are the traditional apples and honey already set up for you, with a little beautiful challah bird to dip into the honey after the Hamotzi blessing is said. These Challah Birds with Apple Honey Nests look complicated to make, but once you know how they're fairly simple to put together.  You can make multiples of this recipe to have enough for more guests if you choose.

Preheat oven to 350°F.  Line a baking sheet with parchment or a silicone mat.  Set aside. Divide the challah dough into 6.   To make the birds, dust a little flour on the pastry board.  Form a long rope around 14-inches long. Make a knot in the dough.  Form one end into a birds head by pinching the tip to become a beak.    [caption id="attachment_9977" align="alignnone" width="271"] 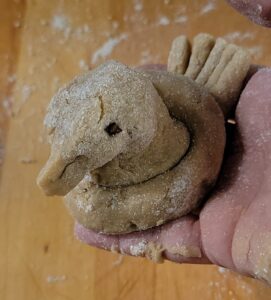 Pre-baking and egg wash.[/caption] Form the other end into a tail by flattening the end, then cutting straight across to make it flat and even.  Make 4 small slits in the tail to simulate feathers. Place two cloves, round side out, into each of the birds heads for eyes. In a small bowl or measuring cup, whisk together the eggs and water.  Brush the birds with the egg wash. [caption id="attachment_9978" align="alignnone" width="233"] 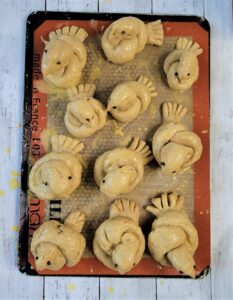 Egg washed and ready to go into the oven.[/caption] Bake for around 15 minutes until browned and cooked through.

For the Apple Nests

Trim the top and bottom of each apple, reserving the trimmed pieces. [caption id="attachment_9979" align="alignnone" width="242"] 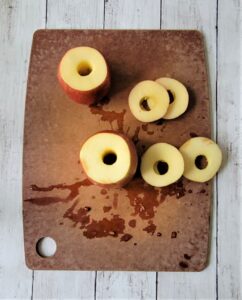 Cored, with the top and bottom sliced off. Reserve the sliced pieces to dice.[/caption] Using a large spiralizer, spiralize two Fuji apples using the smallest "noodle" setting.  Transfer into a large bowl.  Reserve any remaining pieces that were not spiraled into noodles. Add the lemon juice, cinnamon, oil and sugar.  Toss to combine, being careful not to break the noodles. Dice the remaining apple pieces.  Set Aside. Divide the noodles into six piles on the prepared baking sheet.  Using a finger, make an indent into the center of the pile and form the apple pile into a small circle. Divide the diced apples into six portions and place one portion into each apple "nest". [caption id="attachment_9980" align="alignnone" width="225"] 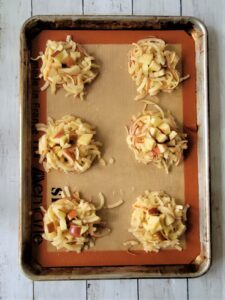 Apple nests pre-baking.[/caption] Bake for 45 minutes, until the apples are soft, golden brown, and slightly caramelized. Allow to rest for 30 minutes. 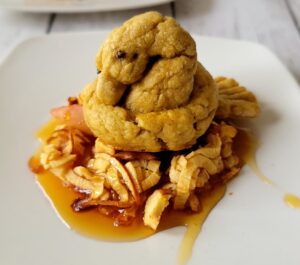 Repeat with the remaining nests and birds and prepare to enjoy.