Jump to Recipe·Print Recipe
It’s been a while since I wrote a “Spice Packet Blog” so this week I was going to write about one of my favorite Spice Packet recipes – Stir Fry Kielbasa and Zucchini.  For those of you that may have seen it but didn’t know what it was, kielbasa is a fat, spicy sausage, around a foot long.  I usually buy the beef and chicken variety (a little healthier than the all beef kind).  They most often come in packages of two and can be found in the (kosher) deli section of your local grocery store.  With that in mind, and a plan for Thursday nights’ dinner, off to the store I went.  First store – no kielbasa!  Not panicking yet. Second store – no kielbasa (I’m telling you it was a conspiracy!).  I had to make do with my backup plan of a package of knockwurst sausages.  Although they work for the recipe, they are not as “sausagy” or as spicy as a kielbasa and it makes the recipe a lot milder than we prefer.  It was second rate Stir Fry “Kielbasa” and Zucchini (with Garlic Bread) for the Matten’s Thursday night.
Luckily it was “Fun Friday” for the Matten kids!  Getting ready for Shabbat and preparing for an up-coming article I had decapitated around 2 pounds of tiny red potatoes.  That means that each potato had a small piece cut off of the top and bottom (I know potatoes are round – I arbitrarily made one section the top and the other side the bottom!!) leaving the rest of the potatoes to be used creatively by the Matten girls.  By now you know that I am a bit of a “gadget queen”, and am raising a pair of “gadget princesses”. When the girls saw the potatoes they grabbed our handy curly fry cutter and proceeded to make curly fries!  They did fry them – in our defense they are just so much better that way!  I think I loved my girls a little more (if that’s even possible) when they asked for mini animal cookie cutters and proceeded to make Noah’s Ark Fries in honor of the weekly Parsha Noach!  Not only did they make really cute Noah’s Ark Fries, but they even fried the outer potatoes which they had cut the shapes from (it’s clearer when you see the pictures).  How fun is that??  I have to admit though that seeing the animals floating in the hot oil kind of made me think of the animals that didn’t make it on to the ark – so sad!
Mazel Tov to my son Nachum (ad meah v’esrim) on the anniversary of his Bar Mitzvah Parshat Noach!
Print

Garlic Bread time!
You know what to do!! 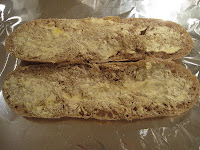 Slice it before you wrap it… 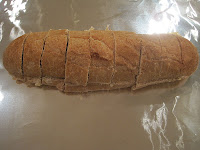 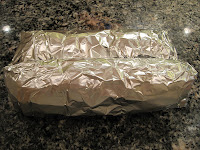 It’s dinner Thursday night
at the Matten’s!!
Noah’s Ark Fries…cute and yummy
(and gluten-free for the GFE)! 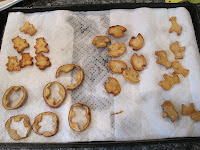