Jump to Recipe·Print Recipe
It’s true.  I am a grocery cart snoop.  I confess that I love to look in other peoples grocery carts to see what new and interesting treasures they found.  I have meddled my way into a plethora of new food items and awesome recipes from friends and acquaintances in the grocery store.  It always seems to take me longer than most to do my weekly/daily/hourly grocery shopping – it’s not just a “find the items on the list” excursion, a trip to the store can be a social and culinary adventure.  I’m sure there’s turnabout too – hmmm what does Sharon Matten have in her cart today?  What is she making for Shabbat this week…and why does she, a pastry chef, have a cake mix in her grocery cart???!!  FROZEN PIZZA??  Maccaroni & Cheese MIX??? You mean she doesn’t make everything from scratch???  You mean Sharon Matten is a mortal humanjust like the rest of us??  Shocking!!
Anyway, I really do get some of my best recipe ideas from friends while grocery cart snooping.  I was recently in Romanian Kosher buying some awesome meat products when I ran into my dear friend and neighbor Shoshi.  As usual I checked out her shopping cart and saw some pretty fabulous looking, thin steaks.  “So Shoshi, what do you do with those steaks?” I asked.  “Oh my goodness,” she answered.  “My family loves these.  My daughter has a great recipe for them and it’s super easy.”   Well, she had me at “family loves these”, and ”super easy” clinched the deal!!  I had her text the recipe to me, and tried it out for one of our Friday night Shabbat meals.  Basically, you sauté thinly sliced onions and mushrooms, and place them on the bottom of a pan. Then you brown the steaks, place them on top of the onions and mushrooms, cover them with Mikee’s sesame teriyaki sauce and bake for a while.  Super easy!  I was so happy with how mine turned out I even took a picture and texted it to Shoshi!  The steaks were good, but kind of salty from the sauce and I probably should have baked them for a little less time.  The family liked the basic idea of the recipe, and they loved the sautéd mushrooms, but I knew I was going to have to try again.  I do think the recipe was fine – it was probably my execution that was off.
A few weeks later I bought another thicker piece of roast.  I followed the same basic recipe that I did for the steaks and used a different type of teriyaki sauce and less of it.  The result was way better, and Dear Son suggested making the meat with the mushrooms and onions on top.  I stored that one away for later use.
So, this week I was in the grocery Shabbat 5 hours before Shabbat store trying to figure out what to make for.  Have you noticed that chicken has gotten super expensive?  What’s up with that?  What are they feeding those chickens – gourmet chicken feed?   Are the chickens living in poultry penthouses?  In any event the only chicken that was budgetary friendly was boneless, skinless chicken breasts.  I bought two packages and on impulse decided to try to make the cutlets using the sautéd onion, mushroom and teriyaki method that Shoshi had recommended for the steaks.  Since I’ve become a GFE (gluten free eater) I decided to try to make them gluten-free, and bought some gluten-free teriyaki sauce too.
Once home, I thinly sliced some wonderful sweet onions and sautéd them in some olive oil with some crushed garlic.  Once they were caramelized I added a pound of thinly sliced crimini/baby portabella mushrooms and a pound of thinly sliced small/medium sized white mushrooms, sautéd them until all the liquid was absorbed, and transferred them to another container to use later.  I then removed the tenders from the chicken (I made chicken fingers from those later), coated the chicken pieces in corn starch, and browned them in the same skillet I had made the onions and mushrooms in.  Although I normally cut chicken cutlets in half to make two thin cutlets I didn’t this time. I was afraid that if the cutlets were too thin they would dry out and taste like salty sawdust.  I made the cutlets in batches and set them on a foil lined, greased baking sheet as they finished browning.  Once they were all done I spooned the reserved onions and mushrooms over the chicken (taking into account Dear Son’s suggestion),  drizzled a cup of GFE teriyaki sauce over the onions and mushrooms, and baked the whole thing for 30 minutes.  The chicken was fast to make…not quite as fast as the steaks were due to the time it took to brown all the cutlets, but still pretty speedy (it had to be – I didn’t leave myself all that much time!).
Gorgeous, aromatic, delicious!  The cutlets were moist, flavorful, and covered with teriyaki infused mushrooms….mmmmmmmmmmmmmm!  The decision to leave the cutlets thicker was a good one. They were fabulous for Shabbat lunch the next day as the cutlets had even more time to absorb the melded flavors.  Although most of us loved the Mushroom and Teriyaki Chicken a small number of the more unadventurous Shabbat guests still would have liked a little less teriyaki sauce on the chicken.  If you are one of those ( 😉 ) you could easily add half the teriyaki sauce and the recipe would still be great.
Happy for our Shabbat guests, but sad for me there weren’t a lot of leftovers for me to eat during the week.  I guess I should really be happy that the recipe was a success!  Happy but hungry!!!  I suppose with the weather being arctic here in Chicago I’ll be able to take some time to come up with some warm, comforting, hearty, winter recipes to sate my hunger and share with you!
Stay warm and Happy 2014!!
Print

Here is the beef I made…
Thanks Shoshi!!! 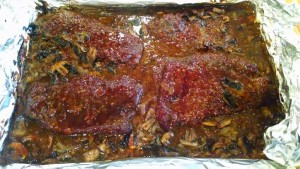