Jump to Recipe·Print Recipe
Hot, hot, hot, hot, hot.  That pretty much sums up the week here in Chicago!!  We broke all kinds of high temperature records with multiple days reaching above 100°!!  You could literally fry an egg on the sidewalk.  We even had some wacky rain storms as a result of the crazy heat.  B”H we managed to get our broken air conditioning fixed on Tuesday…or you would have been able to mop us up with a Swiffer mop!  I’ve been trying to keep my optimistic garden from completely drying out, which has been a bit of a challenge (until yesterday’s crazy rainstorm), and I even “Miracle Growed” it to give the garden a fighting chance.  We did get some awesome tomatoes – hooray!  The cute heirloom little yellow ones ripened (my Mom KIH described them as very “tomatoey”), and we picked the first harvest of the bright red cherry tomatoes – there are a lot of little green ones just waiting to turn.  The squash is flowering, but sadly our cucumbers and strawberries fell victim to the pesky #[email protected]&* squirrels.  For some reason the peppers haven’t really been producing, maybe they realize that there’s already enough heat in the yard!!
In honor of the extreme heat this week I decided to give you a “hot” recipe – Mexican Chili “Hot” Popcorn, and to make up for the extra heat – a cool one too: Cool Creamy Fruity Ice Cream!   Thursday night, Dear Husband and I were trying to decide what recipes to add to this week’s article.  Now it turns out that our favorite second oldest son works for the local Kosher Chinese restaurant, Tein Li Chow (shameless plug), and he brought home some extra Kung Pao Sauce (thanks!).  Dear Husband had added the sauce to some leftover multi-grain rice and was eating that while we were having the discussion.  It smelled incredible (I was actually sniffing the empty bowl when he was done!), and I kindly asked him to make some for me too (YUM!!).  Now, although you all know that we love spicy food here, it may be a lesser known fact that Dear Husband and I love to snack on popcorn.  We usually air pop a huge bowl, spray it with butter flavored non-stick spray, then sprinkle on the Kernel Season’s white cheddar seasoning.  OMG – it’s SO good!  We can easily polish off an entire bowl during a movie.  It was a really simple transition to go from eating incredible, fiery Kung Pao rice, to spicy popcorn – right?  This time I made the popcorn in a pot instead of air popping it.   In order to make the popcorn really hot, I used a little bit of oil and heated the crushed Mexican Chili in the oil.  It really brought out the heat of the peppers!  I then added the popcorn kernels, tightly covered the pot and a few minutes later – perfectly popped hot popcorn.  I used some fine sea salt, but you could use any type of popcorn salt as well.  The popcorn was awesome.  It has a subtle heat to it that somehow manages to get hotter as you eat it.  For those that like it hot, this is the perfect snack!!  Dear Husband was commenting that you could theoretically make all different types of flavored popcorn this way.  I’ll keep you posted. 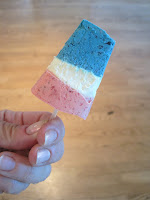 To make up for the extra heat that I just added to your already hot summer, here is a recipe for Cool Creamy Fruity Ice Cream.  Originally, this is one of my aish.com Summertime Recipesand is posted as a layered popsicle type dessert or a refrigerated parfait.  You can make it as a single pan of your favorite flavor of fruity ice cream though.   I had enough people that liked the vanilla section by itself that you could leave the fruit out altogether (gasp!) and just make some really fast, easy, and delicious vanilla ice cream too – no ice cream maker required.  It’s a great recipe to “chill” to.
Enjoy and stay cool!
GFE: Great for the Gluten Free Eater!
Print

For mini cream pops and for individual dessert cups see my article Summertime Recipes on aish.com.
Congratulations!
KosherEveryday is one of the finalists for the
2011 CBS Most Valuable Blogger Awards!!
« Previous Post
Next Post »