Happy Chanukah!!  Last year I introduced the concept of   “Hash Brown Potato Latkes”.  Store bought hash brown potatoes are basically shredded potatoes that can be found in the refrigerated or freezer section of your grocery store.  These were so popular last year that a representative from Simply Potatoes, called me to thank me because sales in our area had gone up!  Local readers who had read the Chicago Tribune Syndication article called to find out where to get the potatoes because they were sold out in local stores!!! How cool is that?!!!  If you missed the Tribune article, I’m going to share it with you here.  You can also find more Hash Brown Potato Latke recipes in my Chanukah 2012 aish.com article (we especiallylove the Kishke and Pastrami Latkes and the Apple Cinnamon Raisin ones!).  There are enough variations that you never have to have the same flavor or type twice!!!   Chag Sameach!! 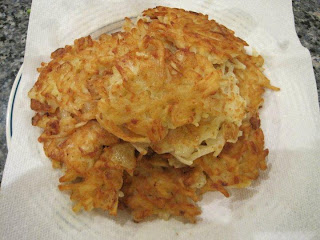 Here is a link to the very, very first Hash Brown Potato Latke recipe on Kosher Everyday!!
Also here is my great recipe from last year for Sufganiot!  Enjoy!!!
(Published in the ChicagoTribune Syndication Chanukah 2011)
Sometimes it takes a miracle to overcome overwhelming adversity, and for the Jewish People that miracle came in the form of a very small army and a little bottle of oil.
Throughout the world, Chanukah is one of the most well-known and celebrated Jewish Holidays, where Jews joyfully commemorate the miraculous victory of the small army led by the Maccabees against incredible odds.  On the 25thday of the Hebrew month of Kislev Jews celebrate the Chanukah or “rededication” of the Holy Temple in Jerusalem after it’s defilement by King Antiochus IV.  Part of the restoration of the Temple was lighting the Temple Menorah with special pure olive oil. There was only one small bottle of oil that hadn’t been contaminated by Antiochus’ soldiers. Miraculously, the single bottle of oil that should have only burned for one day, burned for eight until more pure oil was available. Chanukah is a holiday of miracles where the strong were conquered by the weak, and the many were overcome by the few – all in the name of religious freedom.
As with every Jewish Holiday, there are rituals that connect Jews of all generations to our heritage.  We light an eight candle Menorah, adding one new candle each night of Chanukah, also known as The Festival of Lights. There is a custom to use oil Menorahs to signify the miracle of the oil in the Temple Menorah that burned for eight days.
Something else that ties traditions from one generation to the next is food!  We bring the symbolism from the miracle of the oil into our food by eating foods fried in oil – like potato latkes and “sufganiyot” (fried jelly donuts).  One would be hard pressed to find a Jewish home during Chanukah that isn’t filled with the smell of latkes.  These delicious potato pancakes, fried in oil and topped with anything from applesauce…to sour cream…to chocolate…to jam, are devoured in copious amounts while sharing laughter and tradition with family and friends.
One of the MOST time consuming tasks on Chanukah, is peeling those tiny potatoes to make the potato latkes.  In order to make enough latkes for the ravenous crowd you need to peel around 100 of them.  After that you have to grate or grind them, and if you are a purist you will actually use a hand grater to do the job.  Then, because you have made such delicious latkes, the swarm comes and devours them in five minutes flat.  You are left with the joy of knowing that you fed your hungry crowd – until they ask for more!
In a moment of self preservation, and because of a strong aversion to peeling hundreds of potatoes, the concept of Hash Brown Potato Latkes was born.  Ready to Cook Hash Browns come in the refrigerated or freezer section of the grocery store.  They are basically shredded potatoes with minimal added ingredients.  You can still add your own creative ingredients, giving you additional variety without too much extra work.  Having time to sit down and enjoy the meal with the family – now that is one of the real miracles of Chanukah!
Here are some of my favorite variations of Hash Brown Potato Latkes for each of the eight nights of Chanukah.  You can treat your family and guests to a different delicious version every night!
Use the Classic Hash Brown Potato Latke recipe as the base for these fun and tasty latkes!
FIRST NIGHT:     Classic Hash Brown Potato Latkes (pareve)
SECOND NIGHT:               Zucchini or Sweet Potato Latkes (pareve)
Add 2-3 large grated zucchinis or 2 large grated sweet potatoes, one additional egg, add ¼ teaspoon salt and ¼ teaspoon baking powder, and use ½ cup flour in the potato mixture.
THIRD NIGHT:   Southwest Latkes (pareve)
Use Southwest style Hash Brown potatoes.  As potatoes are pre-spiced, omit pepper from recipe.  Proceed as directed above.  These can be served with Salsa on the side.
FOURTH NIGHT:               “Fried Mozzarella Stick” Cheesy Latkes (dairy)
Add 8 ounces of shredded mozzarella to the latke mix.  Serve warm with marinara sauce.
FIFTH NIGHT:  Smoked Salmon & Goat Cheese Latkes (dairy)
Omit the onion and salt from the original recipe.  For the latkes add:
5                              scallions, chopped
3 ounces              smoked nova salmon, chopped
5 ounces              goat cheese crumbled
You can top with Sour Cream Dill Sauce.
SIXTH NIGHT: Cheddar and Taco Flavored Hash Latkes (dairy)
Omit the salt. Add one 1.25 ounce packet of taco seasoning and 8 ounces of shredded or diced cheddar cheese.  Serve with sour cream and salsa.
SEVENTH NIGHT: Chive Latkes (pareve)
Omit the onion from the original recipe.  Add 1 cup of chopped chives (around ¾ ounce) and ¼ cup of finely chopped dill (optional).  You can top with Sour Cream Dill Sauce (dairy).
EIGHTH NIGHT: Pastrami & Onion Latkes (meat)
In a medium skillet, sauté the onion in 1 tablespoon of canola oil over medium heat until caramelized.   Chop 1/3 pound sliced pastrami. Add the onions and pastrami to the original recipe.
Classic Hash Brown Potato Latkes (pareve)
2016-09-11 20:34:14
Print
Ingredients
Instructions
Recipe is property of Sharon Matten, KosherEveryday.com
Sour Cream Dill Sauce (dairy)
2016-09-11 20:35:08
Print
Ingredients
Instructions
Recipe is property of Sharon Matten, KosherEveryday.com
This year’s Chanukah Cookies!!
Happy Chanukah!
Congratulations!
KosherEveryday is one of the finalists for the
2011 CBS Most Valuable Blogger Awards!!
« Previous Post
Next Post »